The Innolux panel makes a good impression (it is, however, hard to tell how much of the 10 layer bit architecture is actually supported by an Intel CPU with integrated HD 4400 Graphics capability). The same panel can be also found in AOC and some Samsung monitors. The overall design is less convincing. Elegance at a price. And how often will someone actually pivot the screen (with all cables attached)? My DVI cable is nearly finger thick. It would be very challenging to thread that through the oval opening of the pedestal. The old slapstick story of the farmer who hitched his donkey to one of the vanes of a windmill comes to mind. There are the usual non-essential parts, a USB hub (right side) and built in loudspeakers (the Display Port cable carries audio). A web camera was mercifully omitted. There is nothing wrong with any of these extras but other things may be more important. The on screen menu is atrocious. Multi-function keys, deeply layered sub-menus, sluggish response (most likely infrared), poor visibility (minuscule grey labels on a black frame), closely spaced touch zones (spider fingers will be a plus). It would have been better to outsource the fine tuning to a snappy on-screen program. The only exception would be port control (which may be needed before everything is loaded). This is particularly true for a 4K monitor. The used motherboard (ASUS B85M-G) switches from one input port to the other during booting (BIOS can only be accessed/displayed in VGA or DVI mode). The switch over is usually automatic. The screen goes briefly black, before logging into Windows. There actually exists a program for fine tuning Philips monitors from the comfort of a running operating system, SmartControl II (the 64-bit version), but it is poorly written. Loading time is long (the prolonged loading time may be due to difficulties in figuring out a 4 port system). It also does not support 4K screen resolution. Technically it does, but the very first thing anyone running a 4K monitor will do is adjust the text size to something halfway readable. The test pictures of this program are scaled up correspondingly. The result, all clickable control buttons are shifted out of screen range. Dead escape button. The Picture in Picture, as well as Picture by Picture function, can only be accessed via the cumbersome on screen menu. The monitor will remind the user ever so often of things he or she already knows. The Philips monitor supports an 80Hz refresh rate at maximum resolution. (The ASUS motherboard was, in this case, the weak link in the chain, it can cope only with DP 30Hz, HDMI 24HZ). The warning message can be disabled (by hitting the correct multi-function button at the right moment). Most other things were familiar. The refresh rate, as well as the resolution, can be optimized via the Intel HD graphics program and/or the Windows control panel. The Philips monitor uses the same power cable as the old Thinkpad adapter packs. Meaning the Mickey Mouse face (three rings instead of slits). This is only relevant if the standard accessory kit is missing. The monitor comes with a mechanical switch on-switch off button. It is comparatively lightweight. A vintage HP 2025, much more accessible menu buttons, will equal two Philips in weight. 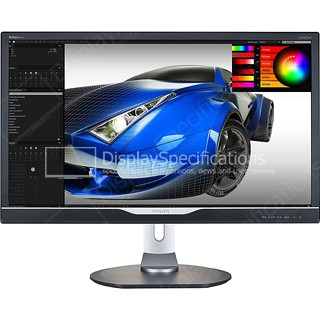