A day ago, Skyworth announced the launch of a trio of TV series and a 48-inch OLED gaming monitor in China with a global launch expected to happen in the upcoming months.

The first of the TV series is the Skyworth S82 with 4K OLED panels. The press release and the brand's website mentioned only a 65" and a 55" model - the Skyworth 65S82 and the Skyworth 55S82, respectively. However, the PR materials also refer to two larger models - the 77" Skyworth 77S82 and the 83" Skyworth 83S82. Whether such models will see the light of day remains to be seen.

The Skyworth S82 series uses for its models 4K OLED V21 display panels. Such a panel is also used by the 77" Xiaomi Mi TV Master 77" OLED. If we compare the specs between the Skyworth and Xiaomi models, we will see a lot in common - 1000 nits of peak brightness, native 10-bit color, native 120Hz refresh rate with VRR support, 1.5:1 contrast, HLG, Doby Vision, and Dolby Vision IQ certification. As we've already mentioned in the material for the Mi TV Master 77" OLED, it is yet to be revealed whether the OLED V21 refers to the latest LG Display OLED evo panels. Skyworth mentions 99.17% DCI-P3 coverage and also elaborates on the factory calibration of the displays which offer a Delta E of 0.86 and ensures correct sRGB/BY.709 coverage. This is a process Skyworth calls Picture Quality Tuning 30+.

In addition, Skyworth also elaborates on its display structure referring to it as Skyworth OBM Slim. More specifically, it uses an MCM composite backplane that replaces the traditional metal backplate and heatsink. With it, heat dissipation is increased by 25%, the average temperature drops by 5 degrees Celsius, and the display becomes thinner. Indeed, the brand says the display is only 3.9 mm thick. There's a second panel on the back of the TV that houses the Skyworth Audio Drum. This is a rear-firing 20W subwoofer that has cleverly been used as a design element as well. The subwoofer is part of the TVs 40W 2.1 CH audio system which also employs two 10W speakers and is Dolby Atmos certified. There's a detailed explanation of how the sound has been optimized but we risk being lost in the translation. Another design element is the Skyworth Ambiglow strip of LED lights placed at the bottom of the display. It can be turned on, off, or synced with a full-time AI voice assistant. Speaking of AI, Skyworth mentions also syncing with smart home gadgets but it does not provide details on the OS running on the S82. Most probably for China, this will be an updated Swaiot system but for the international version of the models, it will most likely be Android 10.

The Skyworth 65S82 and the Skyworth 55S82 are fitted with Skyworth's AI Picture Quality Engine 4K Version based on the MediaTek S900 (MT9950) chipset. It houses a .8GHz quad-core Cortex-A73 CPU and a dual-core Mali-G72 GPU. There are 4GB of RAM and 64GB of storage onboard. The S82 TVs support Bluetooth, Wi-Fi 6, DLNA, and are fitted with two HDMI 2.1 ports (VRR, ALLM, eARC, 4K@120fps), an HDMI 2.0 port, a USB 2.0 and a USB 3.0 port, LAN port, AV Composite in a 3.5 mm jack, optical audio out. As usual, Chinese models have a single antenna input per standard, we expect international versions to have a cable/antenna input or separate satellite and antenna inputs, depending on the market. The S82 series also features a camera but it is not detailed by Skyworth. We suppose it supports voice and gesture interaction. 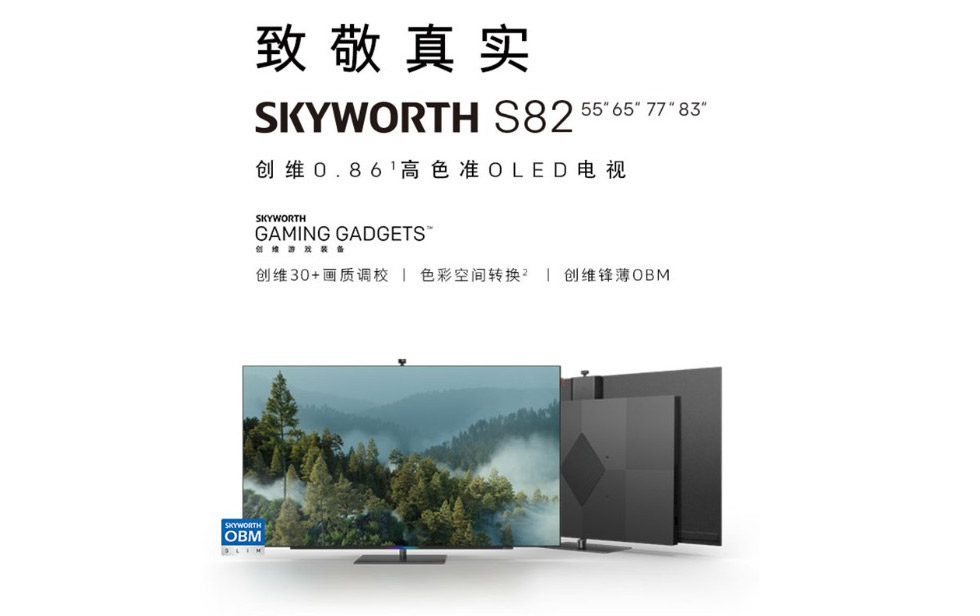