The Skyworth W81 and Skyworth W81 Pro are wallpaper-thin OLED TVs which were globally announced at the CES 2020. At only 4.6mm thick at their slimmest point, these TVs seamlessly attach to the wall. Recently, the manufacturer has released the official specifications and features of these models. Currently, the Skyworth W81 OLED series consists of two models. Each has a 65-inch diagonal size and the Pro version is simply an upgraded variant of the standard one. The company said that details and pricing for the Skyworth 77W81 Pro will be unveiled at a later time.

This television set is equipped with a 65-inch 4K OLED panel from LG Display. According to Skyworth, this is a V19 generation screen as Skyworth has customized it to fit the brand's needs. The TV has a resolution of 3840 x 2160 pixels and arrives with eye-protection and low-blue light techs. It supports Dolby Vision and HDR10. An AI camera and microphone array are embedded on a thin illuminated line. The TV supports Dolby Atmos 2.0.2 and DTS-HD (M6).

The Skyworth W81 is equipped with a quad-core CPU comprising of two Cortex-A73 cores and two Cortex-A53 cores. A quad-core Mali-G51 GPU handles the graphics. They are adjoined by the Chameleon Al picture quality chip which offers pixel-level light control, dynamic target re-shaping, super clarity, etc. The model supports MEMC for 120Hz 4K reproduction. There are 3GB of DDR4 RAM onboard and 32GB of built-in memory. In terms of connectivity, the TV supports dual-band Wi-Fi 802.11ac, Bluetooth 5, Wi-Fi Direct, DLNA. USB 3.0 and HDMI 2.0 inputs are provided as well but no specific details on the connectors are offered. Intelligent voice recognition system and far-field voice are supported as well.

This model is an upgraded version of the Skyworth W81. For starters, it has more RAM and storage - 4GB and 128GB, respectively. It also supports Dolby Atmos 2.1.2 as it arrives with a 5.8G wireless audio box that amplifies the built-in 2.0.2 omnidirectional sound to 2.1.2 one, which the company calls "magic sky sound field." Moreover, the Skyworth W81 Pro is equipped with an always-on dual display powered by Swaiot. It has two sizes - 4-inch and 10.1-inch. There's a 21-inch auxiliary display as well that opens automatically. It is part of a huge soundbar with 8 speakers. This is a totally separate module from the display and the connection between them is via a single cable called Geek Link. The W81 Pro will cost US $4,599 in the US when launched. 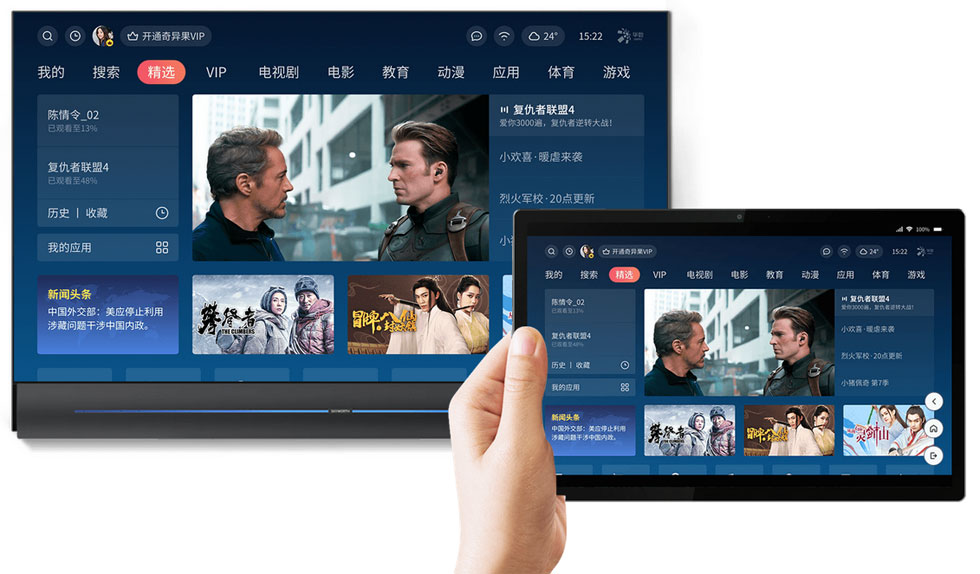