Asus Republic of Gamers (ROG) today announced that the 360 Hz Asus ROG Swift PG259QNR has been selected as the official gaming monitor for the International 10 tournament from DOTA 2. The best teams in the world will meet in Bucharest (Romania) over the next 10 days and compete for a prize of over 15 million dollars. The crowd-funded prize pool amounts to a record sum of 40 million US dollars, and the trend is rising. The top seven will each receive over $1 million, and the last-placed team will go home with over $100,000. Top elite gamers need the best equipment, and they play on the latest ROG Swift 360Hz PG259QNR displays with NVIDIA G-SYNC and NVIDIA Reflex technologies that offer minimal latency, unparalleled motion sharpness, and blazing speeds for the ultimate DOTA 2 experience.

The Asus ROG Swift PG259QNR was announced in August 2020 is the best gaming monitor in its class, offering unmatched smooth display, motion clarity and responsiveness. And it is precisely this achievement that has earned it the prestige of being the official monitor of the DOTA 2 The International 10. The Swift 360 Hz PG259QNR offers a 50% higher refresh rate than the previous generation of 240 Hz displays. The 360 Hz refresh rate allows players to have an extremely fluid display that allows them to accurately determine the positions of their opponents and easily track movements. With such fast games, there may be fluctuations in the frame rate, but important features such as G-SYNC ensure that everything runs smoothly even in the toughest battles.

Sharp edges, no motion blur and minimal ghosting allow players to clearly analyze the gameplay in front of them. The time it takes for a pixel to move from one color to the next is called pixel response. The short panel response time of the Swift 360 Hz PG259QNR is crucial for a clean and clear display of moving images. Built-in NVIDIA G-SYNC Variable Overdrive technology optimizes the screen's response time for best motion at any frame rate.

System latency determines how long it takes for a mouse click to appear in the game and displayed on the screen. The lower the system latency, the faster the movements are implemented in the game. ROG 360 Hz NVIDIA G-SYNC-enabled monitors such as the Swift 360 Hz PG259QNR offer ultra-low latency and feature NVIDIA Reflex – the world's only technology for measuring latency. With nvidia Reflex Analyzer, gamers can optimize their game settings and be sure they have the lowest system latency.

The Swift 360Hz PG259QNR comes with the ROG Desk Mount Kit to give gamers more desk space. The kit has a C-bracket bracket suitable for desks or table tops up to 8 cm thick and includes padding to protect the desk surface. After tightening and locking, the final setup is a breeze as the monitor's mounting arm slides directly into the bracket.

ROG will also be giving away a Swift 360 Hz PG259QNR during the tournament. ROG and DOTA 2 fans only need to visit ROG Global on Facebook, Twitter or Instagram and comment on which team they think will win the DOTA 2 The International 10. Participation is open from 6 to 12 October 2021, and at the end of the event, a winner will be selected at random. 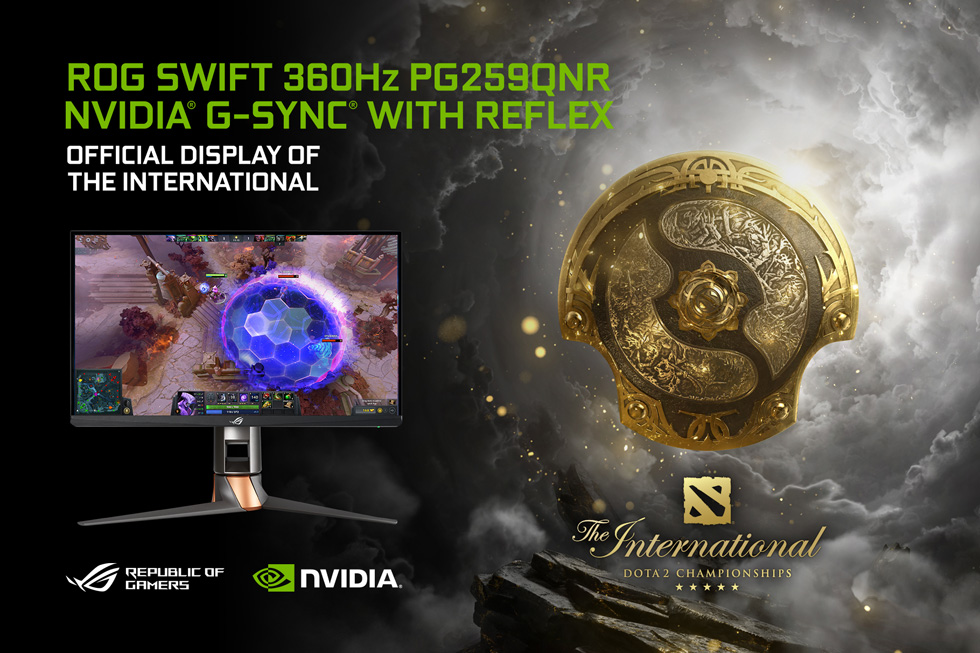 The Asus TUF Gaming VG24VQ1B is the latest offering by the Asus TUF Gaming series of monitors. It has a 23.8-inch VA display with an FHD resolution and a 1500R curvature. The monitor offers 350 nits of brightness and 3000:1 static contrast ratio. It supports up to 165Hz refresh rate via the DisplayPort 1.2 input. The HDMI 1.4 port supports up to 144Hz, and for console playing the maximum is 120Hz. The stand's...