HP has released six 2023 desktop monitors. All of them have IPS displays with a 75Hz refresh rate, 250-350 nits of brightness, 5 ms GTG response time, QHD or FHD resolution, 99% sRGB coverage, a 3-sided micro-edge bezel, HP Eye Ease, and TUV Rheinland certified low blue light and flicker-free solutions. Each monitor has an HDMI 1.4 port, DisplayPort 1.2 input, four USB 3.2 Gen 1 Type-A ports, and a USB Type-B upstream port. The designs are identical with a black head and a black+silver stand that offers up to 150 mm of height adjustment, a bi-directional pivot, +/-45 degrees of swivel, and -5 to 23 degrees of tilt. Here's the list of all six models, each with corresponding specifications pages: 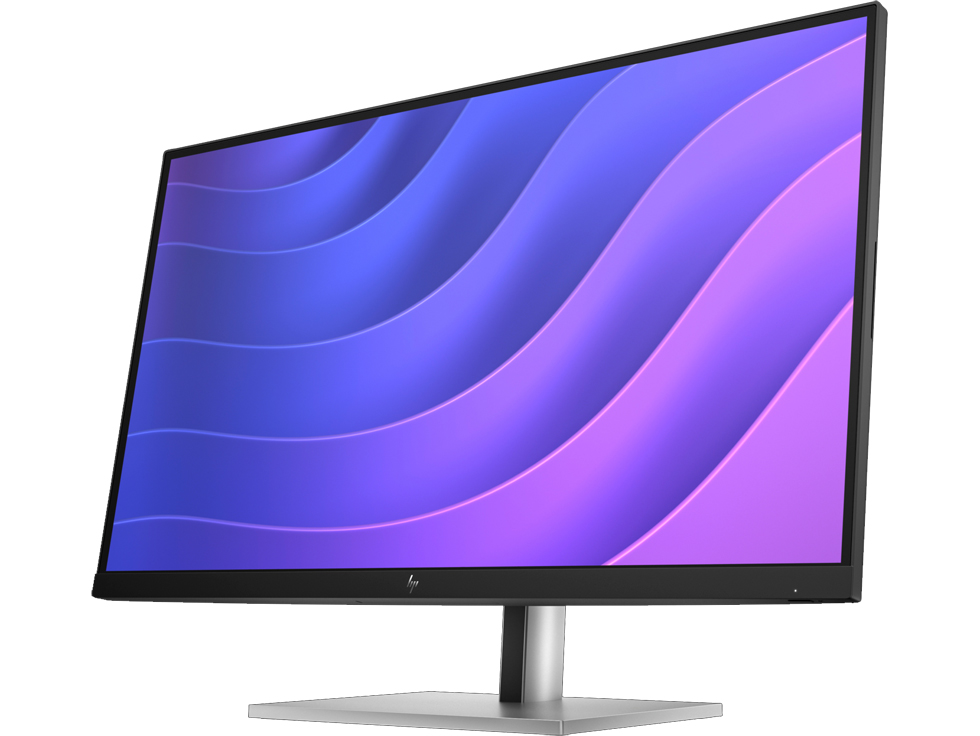 HP E45c G5 was announced at CES 2023 a week ago along with other 2023 HP desktop monitors. The announcement was quite vague, referring to the model as the "world’s first 45-inch super ultrawide dual QHD curved monitor." It is specifically designed for scenarios that require a replacement of two 24-inch QHD monitors with one massive 44.5-inch diagonal monitor. The new Virtual Dual Display feature has been created for...

HP has introduced its 2023 monitors from the E-Series G5 and the M-Series. With display sizes ranging from 21.5 to 44.5 inches diagonally, the HP E-Series G5 Monitors blend seamlessly into the home or office with sleek and elegant designs. The series offers a variety of choices to help hybrid workers stay focused and connected with 4K resolution on select models, curved and ultrawide screens, 99% sRGB, and matching...

The HP Z32k G3 is a 31.5" 4K monitor with an IPS Black panel and Thunderbolt 4 connectivity

HP unveiled the latest model from its Z series - the HP Z32k G3. This monitor features a 31.5-inch IPS Black display panel with a 4K resolution and a 60Hz native refresh rate. The display covers 100% of the sRGB color space and 98% of the DCI-P3 one. IPS Black panels offer rich contrast and the Z32k G3 shouldn't make an exception with a 2000:1 static contrast ratio. It also delivers 400 nits of brightness. The stand...

The HP Z24m G3 QHD is launched with a 23.8" QHD display, 5MP webcam, and rich connectivity

Two months after the launch of the HP Z24q G3 QHD, the brand has released in the US another similar model - the HP Z24m G3 QHD. Both monitors use one and the same display - a 23.8-inch IPS unit with a QHD resolution, 99% sRGB and 90% DCI-P3 color space coverage, 400 nits of typical brightness, and VESA DisplayHDR 400 certification. The monitor has a 5 ms GTG response time and supports up to a 90Hz refresh rate. The...

More than a year after the Z27q G3 QHD, HP released the Z24q G3 QHD. This monitor is built around a 23.8-inch IPS display with a QHD resolution, 99% sRGB and 90% DCI-P3 color space coverage, 400 nits of typical brightness, and VESA DisplayHDR 400 certification. The monitor has a native refresh rate of 90 Hz and VRR is supported. The display has a 4-sided Micro Edge design and a four-way ergonomic stand with...

At CES 2022, HP introduced a number of new monitors, one of which was the HP Z40c G3 - a curved display designed for creators and power users who want to replace their dual monitor setup with one large, immersive, and color-accurate display. It happens to be the world's largest conferencing monitor with an integrated 4K IR webcam. It has a privacy shutter, can be tilted from 5 to -20 degrees, and pops up when...

The HP E27m G4 is another HP conferencing monitor unveiled by the brand but it is flat one. It features the same 5MP camera, HP uses in its latest conferencing models including Zoom certification, Windows Hello support with an IR sensor, dual noise-canceling microphones, two 5W front-firing speakers. The camera supports pop-up privacy, autofocus, and tilt from -20 to 5 degrees. The HP E27m G4 features a 27-inch IPS...

The HP E34m G4 is a new curved conferencing monitor by HP with a 5MP camera, Zoom certification, and Windows Hello support with an IR sensor. Dual noise-canceling microphones and two 5W front-firing speakers excellent sound during video calls. The camera supports pop-up privacy, autofocus, and tilt from -20 to 5 degrees. The HP E34m G4 is built around a 34-inch VA display with a 1500 curvature, 3440 x 1440...

NVIDIA's overview of the future of gaming monitors and new technologies included a number of new displays that were introduced at CES 2022. However, three of those did not receive any official introduction. The first is the AOC AGON Pro AG274QGM which was only mentioned by NVIDIA and teased on AOC AGON's Facebook page with a poster as the "fastest Mini LED monitor." The model is NVIDIA G-Sync Ultimate certified and...

Yesterday, HP unveiled a pair of new monitors from its Z series and one of those is the HP Z34c G3. The brand has already provided full specifications of the model, so here they are. The Z34c G3 Curved Display features a 34-inch IPS display with an 8-bit+FRC panel, 3440 x 1440 resolution, and a 1900R curvature. The display covers 99% of the sRGB and 85% of the DCI-P3 color space. It arrives factory pre-calibrated to...

The HP Z40c G3 and the HP Z34c G3 Curved Displays are designed for creators and power users who want to replace their dual monitor setup with one large, immersive, and color accurate display. The HP Z40c G3 Curved Display, the world's largest conferencing monitor with an integrated 4K webcam, lets you see every detail on a sharp 5K:2K 40" screen with a high aspect ratio, critical pixel density, and get a seamless...

At CES 2022, HP unveiled a trio of monitors, which it touts as "the world's most advanced conferencing monitor series that deliver the most authentic face-to-face meetings in your dedicated workspace." The trio comprises the HP E34m, HP E27m and the HP E24m. Each has a 5MP tiltable privacy webcam with lighting sensors, Windows Hello login, noise-canceling mics, and front-firing speakers. Meeting over 200 quality...