The Dell UP3221Q was showcased at CES 2020 without formal announcement. The company has just announced this model with a staggering price of EUR 4,499 and the official market launch is scheduled for next month. The two most interesting features of this super-expensive monitor are: 1) It has a Mini LED backlight with 2,000 local dimming zones; 2) It has a built-in CalMAN color calibrator.

In terms of the built-in colorimeter feature, it looks like the Dell UP3221Q is the big brother of the Dell UP2720Q. The 27-inch 4K monitor has a built-in colorimeter and is CalMAN Ready, meaning it arrives with an auto-calibration capability. At the same time, the 32-inch Dell UP3221Q is CalMAN Powered. CalMAN Powered devices utilize a fully self-contained version of CalMAN's color calibration engine which has been custom-tailored to the display or device manufacturer's exact specifications. 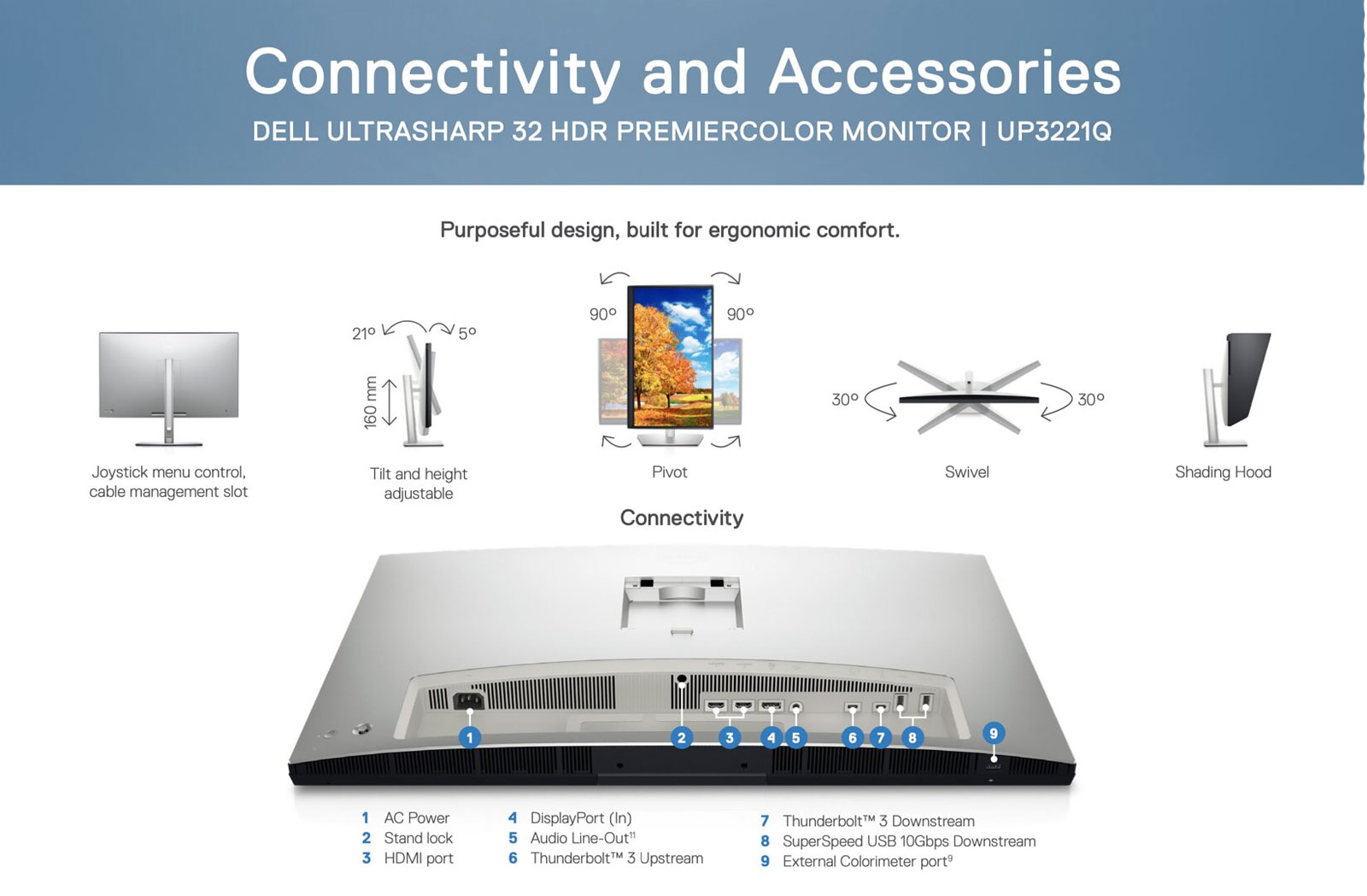 Dell releases three desktop monitors today from its E series. The most interesting one is the Dell U2421E which has a 24.1-inch IPS display with a resolution of 1920 x 1200 pixels and a ComfortView Plus function for low blue light emissions while preserving color accuracy. The display covers 99% of the sRGB color space. The compact stand offers a full set of ergonomic options, including swivel, pivot, tilt, and...

Earlier today, Dell unveiled the Dell P2721Q with a 27-inch 4K IPS display, extended ergonomic options, and plenty of connectivity ones. Later on, the company introduced the Dell P3221D with a 31.5-inch QHD IPS display that provides 350 nits typical brightness, 1000:1 static contrast ratio, covers 99% of the sRGB color space, and supports 10-bit color. The native refresh rate of the monitor at its native resolution...

Dell has released in Japan a new monitor with a 27-inch IPS display dubbed Dell P2721Q. It has a 4K resolution and offers 350 nits typical brightness as well as 1000:1 static contrast ratio. The minimum GTG response time is 5 ms and the average measures 8 ms. Dell does not mention the refresh rate of the model but elaborates on its connectivity options. For starters, the Dell P2721Q is equipped with a USB Type-C...

Dell has announced the launch of the S series of desktop monitors. The main distinctive feature of the models from the Dell S series is a sleek, new design in Platinum Silver. They have integrated speakers, support AMD FreeSync, Low Blue light, FLicker-free techs, and offer 99% sRGB color coverage. The first model from the series is the Dell S3221QS - a curved 4K monitor with a 32-inch VA display panel and a 1800R...

The Dell UP3221Q did not receive a formal announcement but apparently, it was showcased at CES 2020 this week. There are two most noteworthy features about it - it has a built-in colorimeter supporting CalMAN calibration and 2,000 Mini LED local dimming zones. The Dell UP3221Q features a 32-inch 4K IPS panel with 2,000 Mini LED local dimming zones. This surpasses the number of Mini LEDs on the Acer Predator X32 and...