The 2022 Samsung Lifestyle TVs won the ‘Eye Care’ Certification from Verband Deutscher Elektrotechniker (VDE) in Germany, one of Europe’s largest technical-scientific associations with more than 36,000 members. The certification applies to Samsung’s 2022 Lifestyle TV models including The Frame, The Serif and The Sero. The screens are evaluated on various categories, including ‘Safety’, ‘Gentle to the eyes’, flicker level, uniformity and color fidelity.

The new Lifestyle TVs were assessed for safety from blue light emission and melatonin inhibition levels based on a light hazard classification method set by the International Electrotechnical Commission (IEC). Samsung’s 2022 Lifestyle TVs satisfy the IEC’s standards for screen flickering, which can cause eye fatigue or headache for viewers. They were also recognized for excellence in color fidelity and picture quality uniformity, both elements of which contribute to eye comfort level while watching TV.

Samsung’s 2022 Lifestyle TVs1 were also verified as ‘Glare-Free’ by Underwriters Laboratories (UL), a leading independent safety science company. UL’s verification validates the ‘Glare-Free’ claim by assessing the products against Unified Glare Rating (UGR) testing standard set by the International Commission on Illumination (CIE). Samsung’s new Lifestyle TV models use a new Matte Display with anti-glare, anti-reflection and anti-fingerprint properties to deliver the optimal brightness and provide the best picture quality without glare. These glare assessments were calculated based on test results of watching TV in both 300 lux, which is equivalent to a brightly lit work area, and in 150 lux, which is usually the value for a dimly lit work area.

These models receiving this recognition from Pantone include all 20 newly released models – 15 QLED TVs in both 4K and 8K and five monitors. Samsung’s 2022 QLED TV line-up was recognized for its accurate expression of 2,030 Pantone colors and newly added 110 skin tone shades.

"As TVs become more of an entertainment hub in the home, there’s an increased demand for screens with top-tier picture quality that minimize eye strain," said Seokwoo Yong, Executive Vice President and Head of R&D Team, Visual Display Business at Samsung Electronics. "This recognition from leading global institutes validates our technology that delivers best-in-class images along with the most comfortable watching experience." 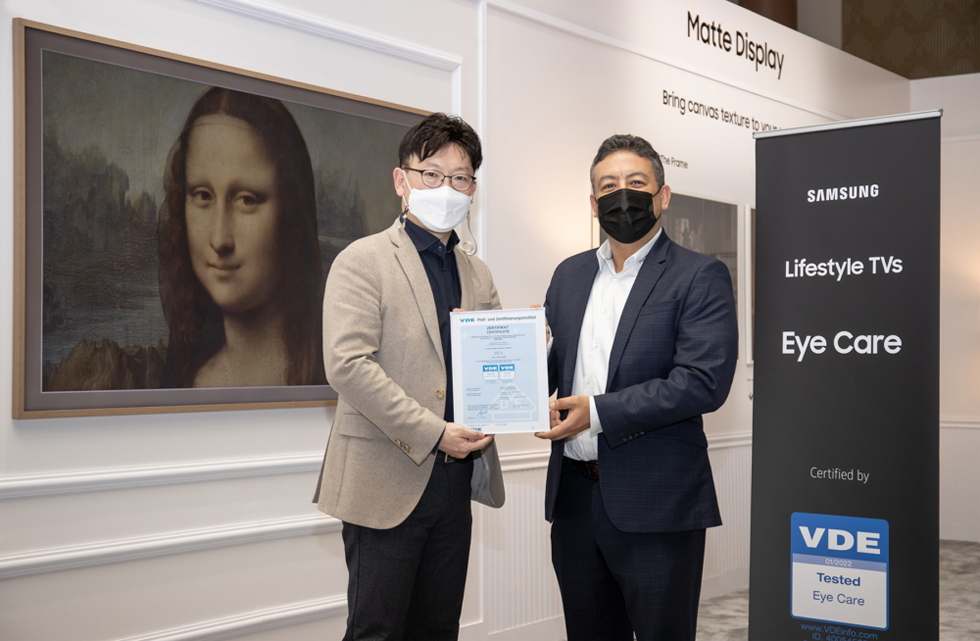 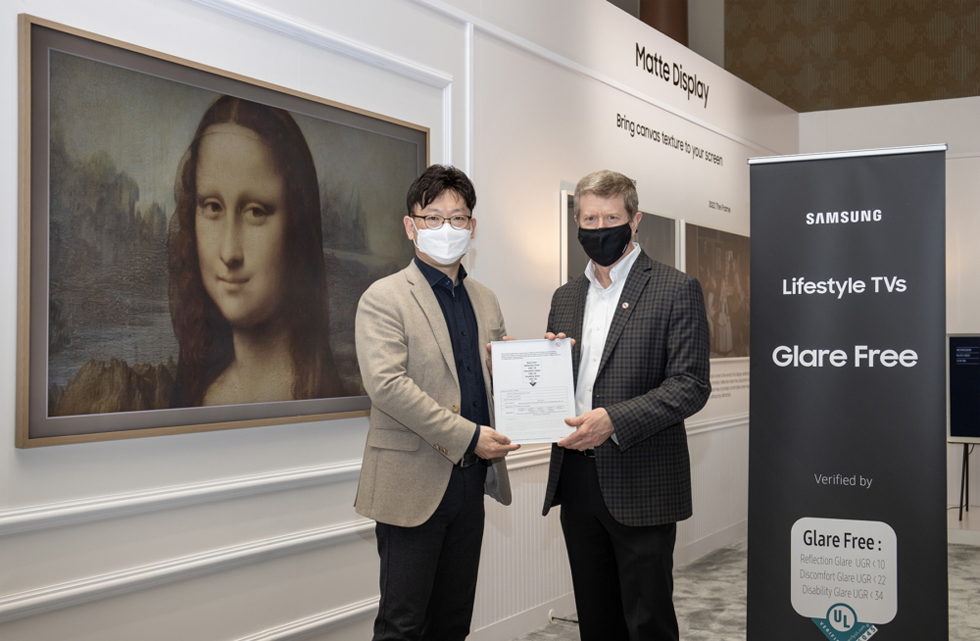 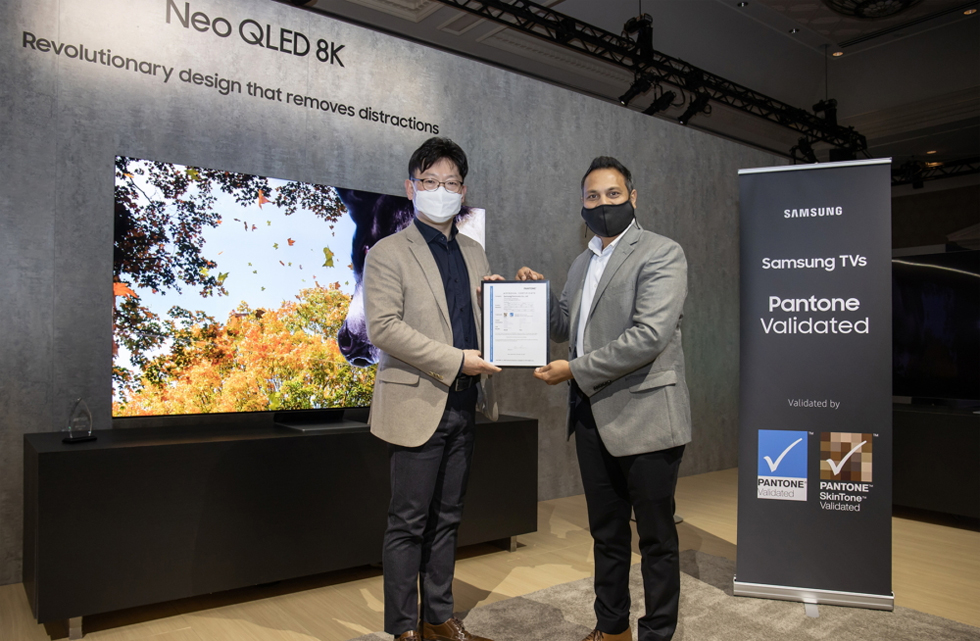 Report: Samsung will present new TVs with W-OLED panels from LGD in June at the earliest

The Elec has learned that Samsung will launch OLED TVs with panels from LG Display in June at the earliest. The initial plans were to launch such TVs in the spring. The delay was due to negotiating the unit price and the number of panels. Samsung has required a lower price than the initially pitched one which was already lower than that offered to LG Electronics. It becomes clear that Samsung and LG Display will...

The Samsung Odyssey Neo G8 a.k.a. Samsung S32BG85 summary of features and specs

The Samsung Odyssey Ark is a 55-inch, 4K, flexible and curved gaming screen

Unveiled at CES 2022, the Samsung Odyssey Ark is a 55-inch, 4K 16:9, flexible and curved gaming screen (1000R) that takes immersion to the next level with a multi-view experience that allows users to play games, video chat with friends, and watch gaming videos at the same time. You can use it horizontally or vertically and enjoy various types of content on it simultaneously. In addition to offering pivot, the stand...

The Samsung Odyssey G8QNB with Samsung's own 34-inch QD-OLED display has won the CES 2022 Best of Innovation Award and has become a CES 2022 Innovation Honoree. With high-performance features like a 175Hz refresh rate and 0.1ms response time, Samsung G8QNB will give gamers a competitive edge. The 1800R curvature offers an immersive experience of this ultra-wide quad high definition (UWQHD) resolution display with...

At CES 2022 in Las Vegas, Samsung will unveil a large number of new monitors which are scheduled to be launched in the global market, including Korea, in the first half of 2022. Samsung Odyssey Neo G8 The Samsung Odyssey Neo G8 a.k.a. Samsung S32BG85 is the first from the new offering becoming also the world's first 4K 240Hz gaming monitor. It has a 32-inch, 4K display with a 1000R curvature. In the same way as the...

Samsung Electronics announced that select 2022 4K and 8K TVs and gaming monitors will support the new HDR10+ GAMING standard, delivering the immersive, ultra-responsive HDR gaming experience to gamers. The new, cutting-edge HDR gameplay will be unveiled at CES 2022 along with a list of 4K and 8K game titles, all powered by NVIDIA GPUs. "We are extremely proud to announce that the new HDR10+ GAMING standard will be...

Two other Samsung UHD TVs have received certification from the brand's domestic agency. The Samsung HG75AU800 and the Samsung HG43AU800 most probably comprise the biggest and smallest model from what looks like an AU800 series for 2022. We can't confirm for sure that's the official name of the series though. Even more so, the model names begin with HG, not with the usual K for Korea. There's no other info about...