NVIDIA's overview of the future of gaming monitors and new technologies included a number of new displays that were introduced at CES 2022. However, three of those did not receive any official introduction.

The first is the AOC AGON Pro AG274QGM which was only mentioned by NVIDIA and teased on AOC AGON's Facebook page with a poster as the "fastest Mini LED monitor." The model is NVIDIA G-Sync Ultimate certified and is actually very similar to the AOC AGON AG274QG (pictured above) with the big difference being the addition of a Mini LED backlight, which stands for the "M" at the end of the model name. We suppose that many other features of the new model will be the same as those of the non-MiniLED one.

The second monitor is the ViewSonic ELITE XG272G-2K. This one was only mentioned by NVIDIA featuring a 27-inch, QHD, 300Hz display in a similar fashion to the MSI MEG 271Q Mini LED and the AOC AGON Pro AG274QGM.

Finally, there's the HP Opmen 32u which remains only mentioned as a 4K IPS Mini LED display - no photo, no other details. When we get mode information about each of these models, they will be properly introduced. 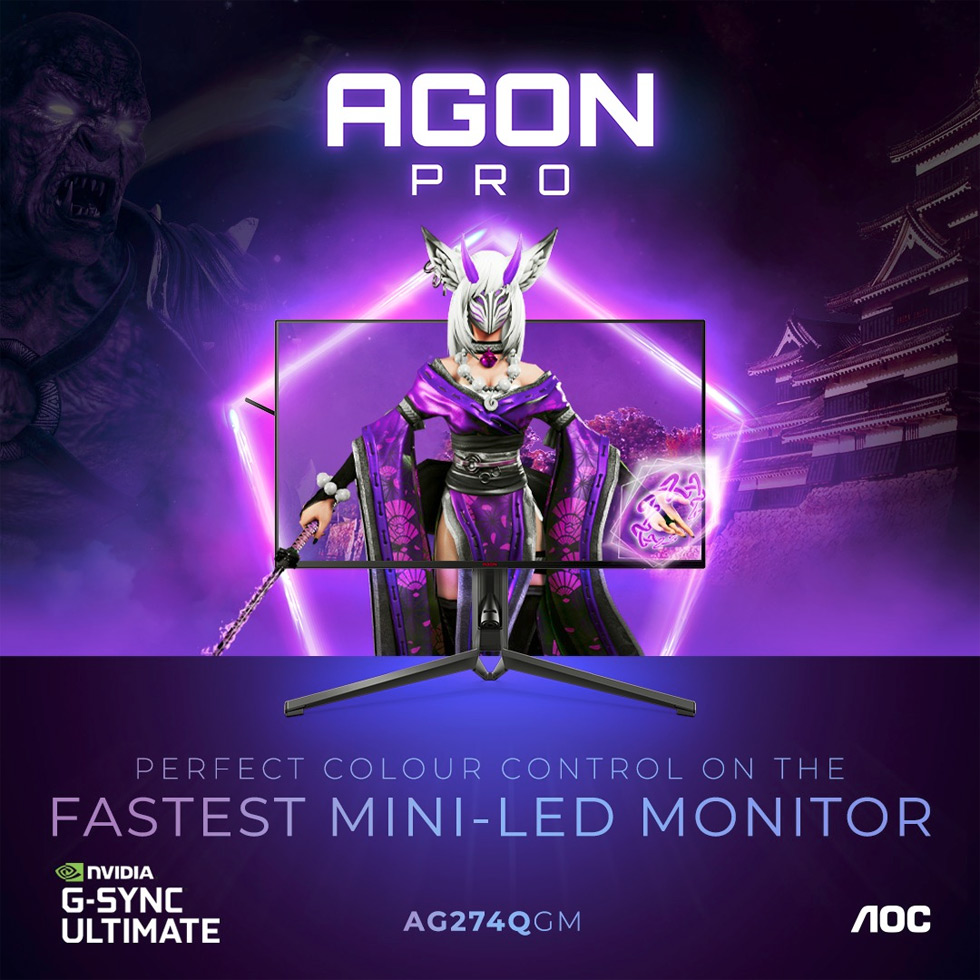 The HP E27m G4 is another HP conferencing monitor unveiled by the brand but it is flat one. It features the same 5MP camera, HP uses in its latest conferencing models including Zoom certification, Windows Hello support with an IR sensor, dual noise-canceling microphones, two 5W front-firing speakers. The camera supports pop-up privacy, autofocus, and tilt from -20 to 5 degrees. The HP E27m G4 features a 27-inch IPS...

The HP E34m G4 is a new curved conferencing monitor by HP with a 5MP camera, Zoom certification, and Windows Hello support with an IR sensor. Dual noise-canceling microphones and two 5W front-firing speakers excellent sound during video calls. The camera supports pop-up privacy, autofocus, and tilt from -20 to 5 degrees. The HP E34m G4 is built around a 34-inch VA display with a 1500 curvature, 3440 x 1440...

The ViewSonic VA2932-MHD has been simultaneously announced and launched to market in Singapore. With a display ratio of 21:9 and a 3-side borderless design, this monitor is created for streamlining work. It provided extra real estate for a more convenient way to process documents and switch between apps by allowing you to arrange multiple windows to your convenience. The ViewSonic VA2932-MHD has a 29-inch SuperClear...

The MSI Optix MPG321UR-QD Xbox Edition was quietly unveiled at CES 2022. This is the MSI Optix MPG321UR-QD but with a "Designed for Xbox" logo and with various features especially designed for console gamers to provide an amazing experience on the Xbox series X/S. The MPG series also features MSI exclusive Gaming Intelligence which includes Smart Brightness, Smart Crosshair, Optix Scope Night Vision AI, and Sound...

ViewSonic has just announced a trio of ELITE gaming monitors with Mini LED backlights. The first model is the mysterious ViewSonic ELITE XG272G-2K which was only marked by NVIDIA in its overview of the monitors of the future. Well, it is not a secret anymore. This 27-inch model enables fluid gameplay with advanced NVIDIA G-SYNC ULTIMATE capabilities, alongside an exceedingly fast refresh rate of 300Hz. The monitor...

The AOC AGON PRO AG274QGM has been just officially unveiled after only being teased on AOC AGON's Facebook page and mentioned by NVIDIA. In the competitive environment of fast-paced games, where victory is measured in milliseconds, the stakes are sky-high and a single miscalculated aim or even a slight input lag can mean an early loss. Games using NVIDIA's Reflex API will reduce the input latency by dynamically...

The MSI MEG 271Q Mini LED is the latest gaming monitor by the brand, which happens to be the world's first 27-inch 300Hz Rapid IPS Mini LED gaming monitor. It arrives with the NVIDIA G-Sync Ultimate technology and patented mini LED backlight control. Over 1000+ mini LEDs on the backlight unit and NVIDIA-patented backlight control technology give you the next-level gaming experience. This makes it the first-ever mini...

The ViewSonic XG321UG has received a total of three announcements. At first, it was unveiled at CES 2021 in January 2021 as part of ViewSonic's portfolio for 2021. Back then, the model was planned for a Summer 2021 release and was mentioned with VESA DisplayHDR 1000 certification. In the summer, or to be exact - at the end of August, the ELITE XG321UG received another introduction as being released to the market...

Yesterday, HP unveiled a pair of new monitors from its Z series and one of those is the HP Z34c G3. The brand has already provided full specifications of the model, so here they are. The Z34c G3 Curved Display features a 34-inch IPS display with an 8-bit+FRC panel, 3440 x 1440 resolution, and a 1900R curvature. The display covers 99% of the sRGB and 85% of the DCI-P3 color space. It arrives factory pre-calibrated to...

The HP Z40c G3 and the HP Z34c G3 Curved Displays are designed for creators and power users who want to replace their dual monitor setup with one large, immersive, and color accurate display. The HP Z40c G3 Curved Display, the world's largest conferencing monitor with an integrated 4K webcam, lets you see every detail on a sharp 5K:2K 40" screen with a high aspect ratio, critical pixel density, and get a seamless...