In addition to officially announcing the Dell UP3221Q with 2,000 Mini LEDs, the company also unveiled the Dell U3421WE that will go on sale on December 1st priced EUR 1,030. The monitor has a 34-inch IPS display with a 1900R curvature, a WQHD resolution (3440 x 1440), and a native refresh rate of 60Hz. The typical brightness is 300 cd/m² and the contrast ratio is 1000:1. The display covers 95% of the DCI-P3 color space and 99% of the sRGB one. The GTG response time is 5 ms in fast mode and 8 ms in normal mode. The connectivity options of the Dell U3421WE include a KVM switch, two HDMI 2.0 inputs, two DisplayPort 1.4 connections, a USB Type-C port with DisplayPort Alt Mode and 90W PD, another USB-C port with 15W PD, four USB Type-A ports, a LAN port, and a headphone jack. The monitor has two 5W speakers built-in. Its ergonomic options include height, tilt, and swivel adjustment. 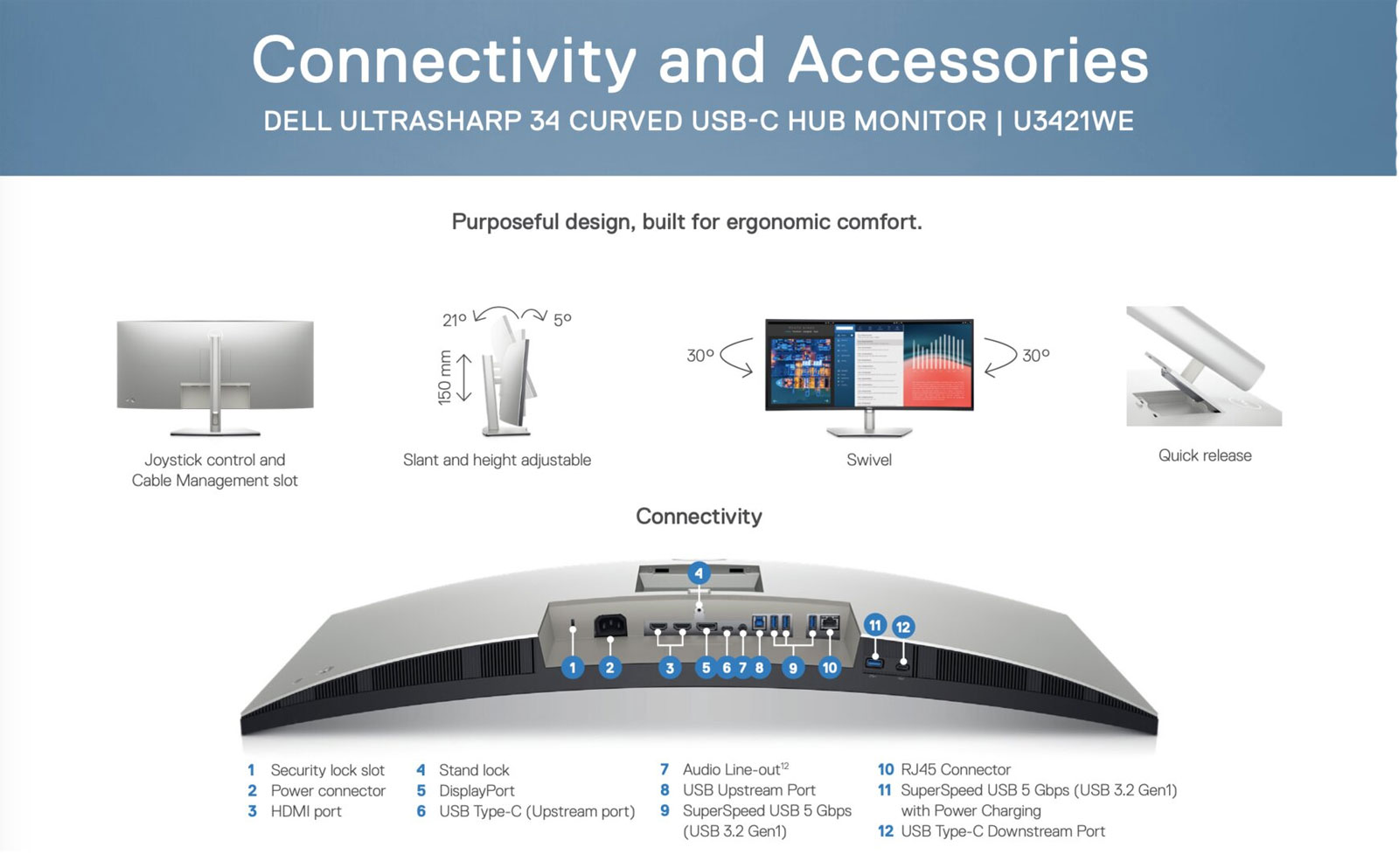 The Dell UP3221Q was showcased at CES 2020 without formal announcement. The company has just announced this model with a staggering price of EUR 4,499 and the official market launch is scheduled for next month. The two most interesting features of this super-expensive monitor are: 1) It has a Mini LED backlight with 2,000 local dimming zones; 2) It has a built-in CalMAN color calibrator. The Dell UP3221Q features a...

Dell releases three desktop monitors today from its E series. The most interesting one is the Dell U2421E which has a 24.1-inch IPS display with a resolution of 1920 x 1200 pixels and a ComfortView Plus function for low blue light emissions while preserving color accuracy. The display covers 99% of the sRGB color space. The compact stand offers a full set of ergonomic options, including swivel, pivot, tilt, and...

Earlier today, Dell unveiled the Dell P2721Q with a 27-inch 4K IPS display, extended ergonomic options, and plenty of connectivity ones. Later on, the company introduced the Dell P3221D with a 31.5-inch QHD IPS display that provides 350 nits typical brightness, 1000:1 static contrast ratio, covers 99% of the sRGB color space, and supports 10-bit color. The native refresh rate of the monitor at its native resolution...

Dell has released in Japan a new monitor with a 27-inch IPS display dubbed Dell P2721Q. It has a 4K resolution and offers 350 nits typical brightness as well as 1000:1 static contrast ratio. The minimum GTG response time is 5 ms and the average measures 8 ms. Dell does not mention the refresh rate of the model but elaborates on its connectivity options. For starters, the Dell P2721Q is equipped with a USB Type-C...

Dell has announced the launch of the S series of desktop monitors. The main distinctive feature of the models from the Dell S series is a sleek, new design in Platinum Silver. They have integrated speakers, support AMD FreeSync, Low Blue light, FLicker-free techs, and offer 99% sRGB color coverage. The first model from the series is the Dell S3221QS - a curved 4K monitor with a 32-inch VA display panel and a 1800R...

The Dell UP3221Q did not receive a formal announcement but apparently, it was showcased at CES 2020 this week. There are two most noteworthy features about it - it has a built-in colorimeter supporting CalMAN calibration and 2,000 Mini LED local dimming zones. The Dell UP3221Q features a 32-inch 4K IPS panel with 2,000 Mini LED local dimming zones. This surpasses the number of Mini LEDs on the Acer Predator X32 and...