Redmi is a sub-brand of China-based Xiaomi. And while the latter has managed to create a good name for itself in the TV business, especially among Chinese and Indian consumers, Redmi is still at the beginning of this path. In August 2019, the brand announced its first TV - the 70" Redmi TV. Today, it unveiled a huge, 98-inch TV set dubbed Redmi Smart TV MAX. This TV has a 4K UHD resolution and a Direct LED backlight incorporating 192 local dimming zones. The display panel covers 85% of the NTSC color space, which is more than 100% sRGB. Of course, a number of image-tweaking techs are on board, including MEMC (motion-estimation motion-compensation). A custom 12nm chipset with Cortex-A55 CPU cores and a Mali G31 MP2 GPU is at the core of the processing power of the model and is paired to 4GB of RAM and 64GB of storage. The Redmi Smart TV MAX has two 8W speakers, three HDMI ports, an AV Composite-in port, two USB inputs, Ethernet port, S/PDIF, etc. It arrives with MIUI-based custom PatchWall, with Bluetooth voice remote control and Xiaomi's AI voice assistant support. The TV will be available via Xiaomi's websites and will go on sale on April 9. It costs CNY 19,999 (USD 2825). 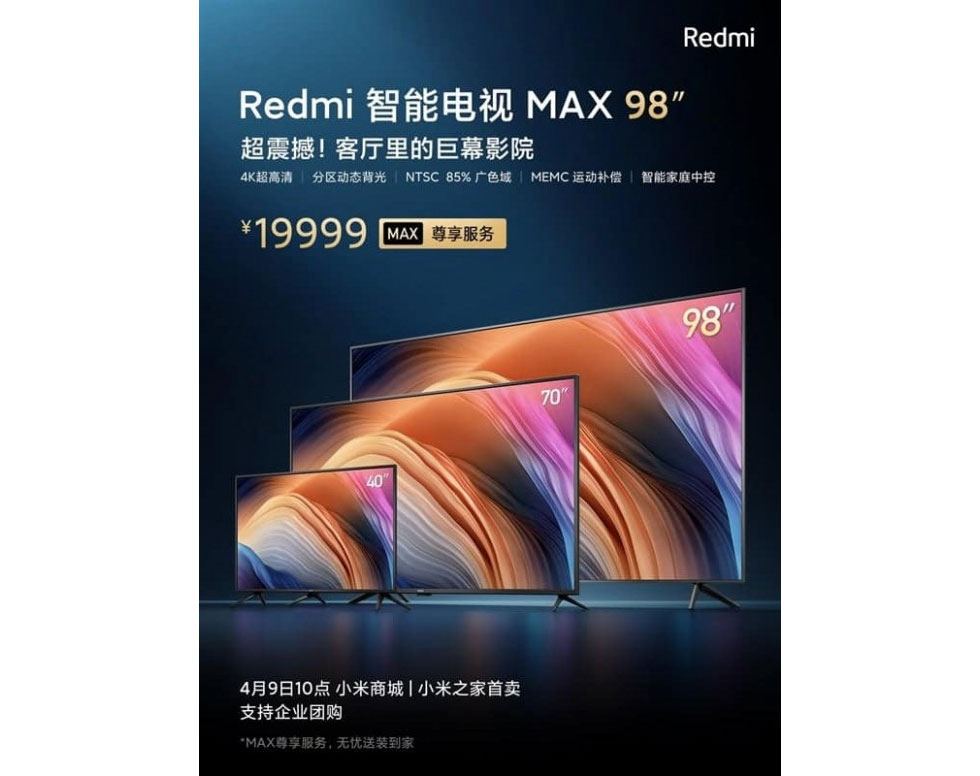 Yesterday, Redmi has created a Weibo page especially for its Redmi TV and today, it teased its first TV model with an official render. The latter unveiled an ultra-narrow bezel and ultra-high screen ratio. The Redmi logo can be seen in the centre of the lower frame. The TV stand is similar to that of the already familiar Xiaomi TVs. Redmi announced that it will unveil the 70-inch 4K TV on August 29th together with...