The first TV from the TCL X10 series of Mini LED QLED TVs is finally launched and the first market to get it is Japan. The price there is not announced yet but it is already listed on a number of online stores. It is expected that in Europe and the UK, this model will have an Onkyo soundbar and will be priced at €2200. Only the 65-inch model is currently available in Japan - the TCL 65X10 Japan.

The TCL 65X10 Japan features a 4K UHD VA panel with a Mini LED backlight and a Quantum Dot colour film. The backlight consists of 768 zones, each of which consists of 20 Mini LEDs, so the hole backlight has a total of 15,360 Mini LEDs. The peak brightness of the model is 1500 nits and the contrast ratio is 4000:1. The response time is specified as 6 ms and the input lag is 8 ms. The panel covers 100% of the DCI-P3 colour space. The TV has a stand with a built-in Dolby Audio soundbar with Dolby Atmos support. The Japanese model employs 2x 15W and 2x 10W speakers. It is not specified whether or not these include subwoofers. The stand cannot be removed in case you want to wall-mount the TV. The product has 300 x 300 mm holes (VESA). The TCL 65X10 Japan runs on Android TV 9 but there's no information about the chipset. The connectivity options include three HDMI 2.0 inputs, all three with HDCP 2.2 and CEC and the first is also with ARC support. A video component in 3.5 mm jack is available along with optical audio out and a 3.5 mm audio-out jack. Two USB 2.0 ports, a LAN input and two satellite-in ports are also available. The latter can also serve as an RF antenna input. For the upcoming TCL 75X10 we expect 8K resolution and HDMI 2.1 ports. The X10 models in Europe and the UK will have Onkyo soundbars. The US and Japan don't have Onkyo-branded soundbars. More information will be added as we get it. We also expect a 55X10 model to appear.

[UPDATE 1]: It looks like the TCL 65X10 Europe has been launched as well. The main differences with the Japanese model are in the power consumption, Wi-Fi bands and TV tuners. The EU model has an Onkyo soundbar, while the Japanese does not. The EU model is lighter than the Japanese one with and without the stand. There's a current confusion as per the pane's native frequency. The Japanese TCL website says 60Hz that goes up to 120Hz with MEMC. The French TCL website does not mention MEMC but native 100Hz Motion Clarity. We're digging into the matter to clear it out. 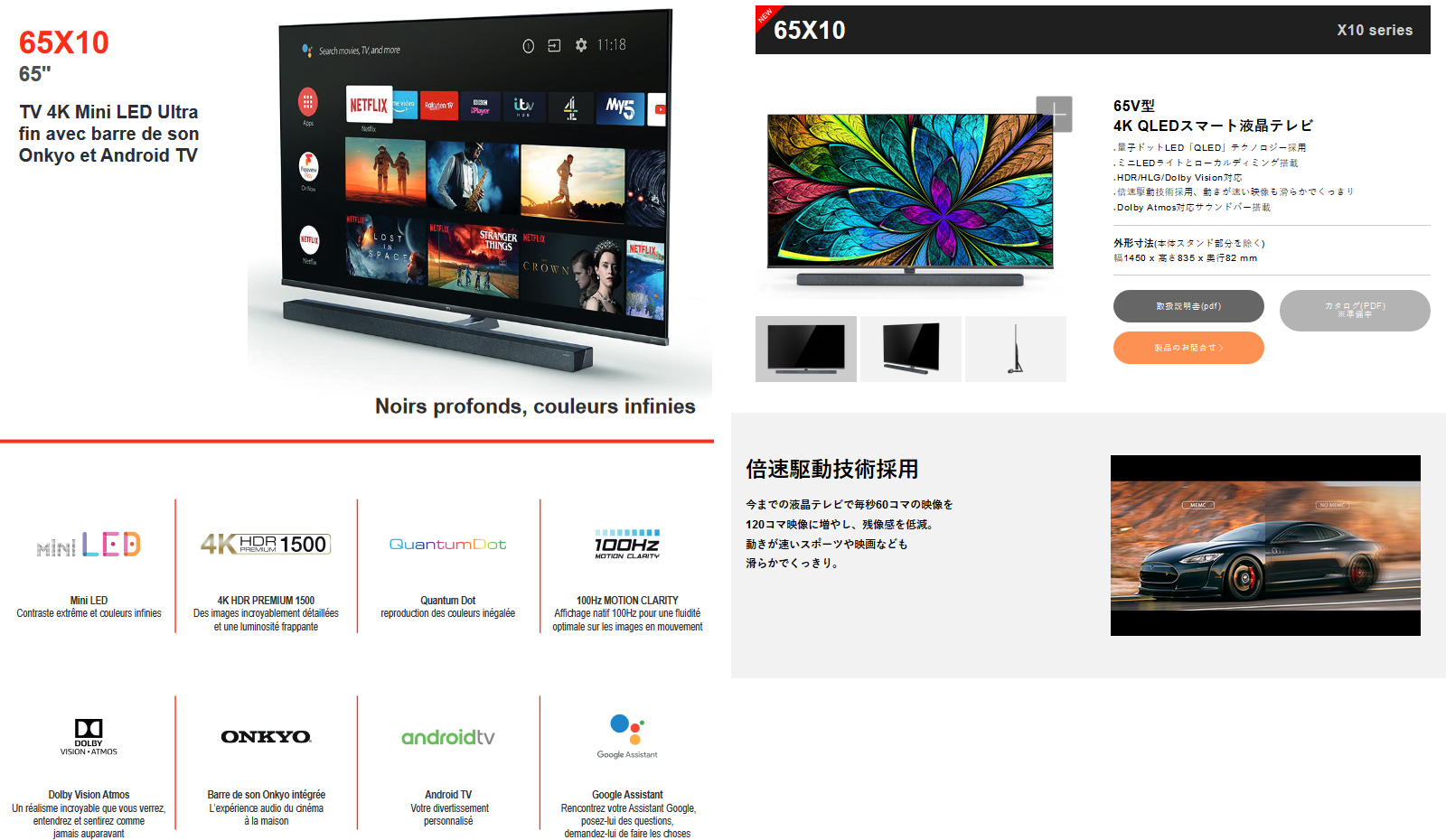 In June this year, TCL CSOT invested in JOLED for a joint-development of large-sized printed OLEDs for TVs. TCL CSOT has already invested nearly USD 30 billion in display manufacturing ranging from Gen 6 to Gen 11 fabs in China and India, across LCD, LTPS, OLED and other technologies, that makes TCL CSOT a major powerhouse in the display world. According to the latest reports from the 2020 China International OLED...

Select 2019 TCL TV models get eARC and VRR with the Roku OS 9.4 update