The National Radio Research Agency of Korea has started to gradually certify the 2021 LG OLED TVs. Of course, the model nomenclature shows the names of the models as they will be available in the Korean market, which is with KNA at the end - LG OLED65G1KNA. The same models have also received FCC certification. 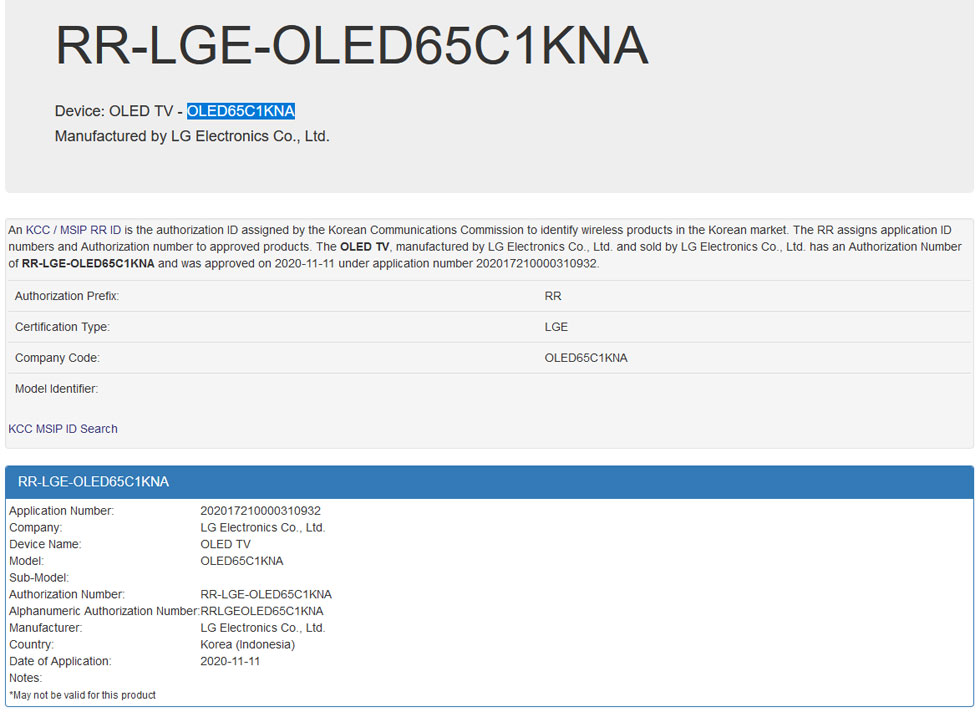 LG OLED TV has become the official TV partner of the Xbox Series X console in key markets across Europe, Africa, the Middle East, and Asia-Pacific. The combination of LG's most advanced TV and Xbox's most powerful console ever allow both casual and serious gamers alike to enjoy next-generation gaming today. With features such as an ultra-fast 1ms response time with low input lag and support for the latest HDMI...

LG's TV plant in Reynosa, Mexico has increased production by 30%

LG has announced that it has increased TV production at its Reynosa plant in Mexico by 30% compared to a year ago. This happens in response to the growing demand for TVs in North America ahead of the peak season. The Reynosa plant works with two shifts - night and day - since July. According to market researcher Omdia, global OLED TV shipments are expected to surpass 1 million units in the fourth quarter, which is...

LG has prepared a trio of gaming monitors for a late November launch. These are the LG UltraGear 32GN650, 27GN650, and LG 24GN650. All three models offer an ergonomic stand for tilt, height, and pivot adjustment. Their connectivity options include two HDMI 2.0 inputs, DisplayPort 1.4, and a headphone jack. Features that the three gaming monitors share include a 3-Side Virtually Borderless display design, AMD...

LG has released another monitor from its UltraFine series with an Ergo stand. After the LG 32UN880, LG 27UN880, LG 34WN780, and the LG 27BN88Q, it now releases LG 27BN88U. They all have LG's Ergo Stand with a C-Clamp, which offers extreme ergonomic abilities. It can extend and retract when needed, swivel up to 280 degrees in either direction, pivot in either direction, tilt, and adjust the height up to 130 mm. The...

The LG 32QN650 arrives with a 31.5" QHD IPS display and height-adjustable stand

Another new 31.5-inch monitor emerged today - the LG 32QN650. This one is identical to the LG 32QN650 the only difference being that the new model offers height adjustment as well. Hence, the weight and dimensions with the stand are slightly different. In terms of display properties, the two models are one and the same. They employ a 3-Side Virtually Borderless design with an Edge-ArcLine Stand. The IPS display...

LG Innotek has developed a high-efficiency ferrite enabling the creation of ultra-slim TVs. As the manufacturer puts it: "Ferrite is a magnetic material with iron oxide as its primary raw material, and ferrite powder is hardened into a tile shape" to provide stable power supply to TV display panels and other industrial products. For example, it can also reduce the weight of vehicles which leads to increased...

LG is finally ready to launch the world's first rollable TV - the LG SIGNATURE OLED R a.k.a. LG OLED65RXPUA for the USA and LG OLED65RXKNA for South Korea. For starters, the TV will be available in South Korea only, priced at KRW 100 million (USD 87,000). The R in the name not only signifies that the TV is rollable but that the TV is also revolutionary in the home entertainment space, redefining the relationship...

LG continues releasing monitors with its impressive Ergo stand. After the LG 32UN880, LG 27UN880, and the LG 34WN780, it is now time for the LG 27BN88Q. They all have LG's Ergo Stand with a C-Clamp, which offers extreme ergonomic abilities. It can extend and retract when needed, swivel up to 280 degrees in either direction, pivot in either direction, tilt, and adjust the height up to 130 mm. The stand can be removed...