The Hisense Vidda 85V1F-S is now on sale in China. This is the top model of the Vidda V1F-S series and is priced at CNY 8,499 (USD 1,314 / EUR 1,133). The model features a 4K display with a 120Hz refresh rate and 120Hz MEMC (Motion Estimation Motion Compensation) technology. A specific feature of the TV is that its Direct LED backlight uses a new and more expensive red phosphor which helps increase 130% coverage of the BT.709 color space. 10-bit color support is also mentioned but it is not specified whether it is achieved by dithering (FRC). The TV is HDR10 certified and supports Super Resolution technology - intelligent 4K upscaling. It is part of a suite of 20 technologies supported by the 4K U+ engine, which also includes noise reduction, MEMC, wide color gamut, color gamut conversion, dynamic contrast enhancement, no strobe, game mode, brightness transition enhancement, etc.

The Hisense Vidda V1F-S series includes four other models. Here's a list of all available ones: 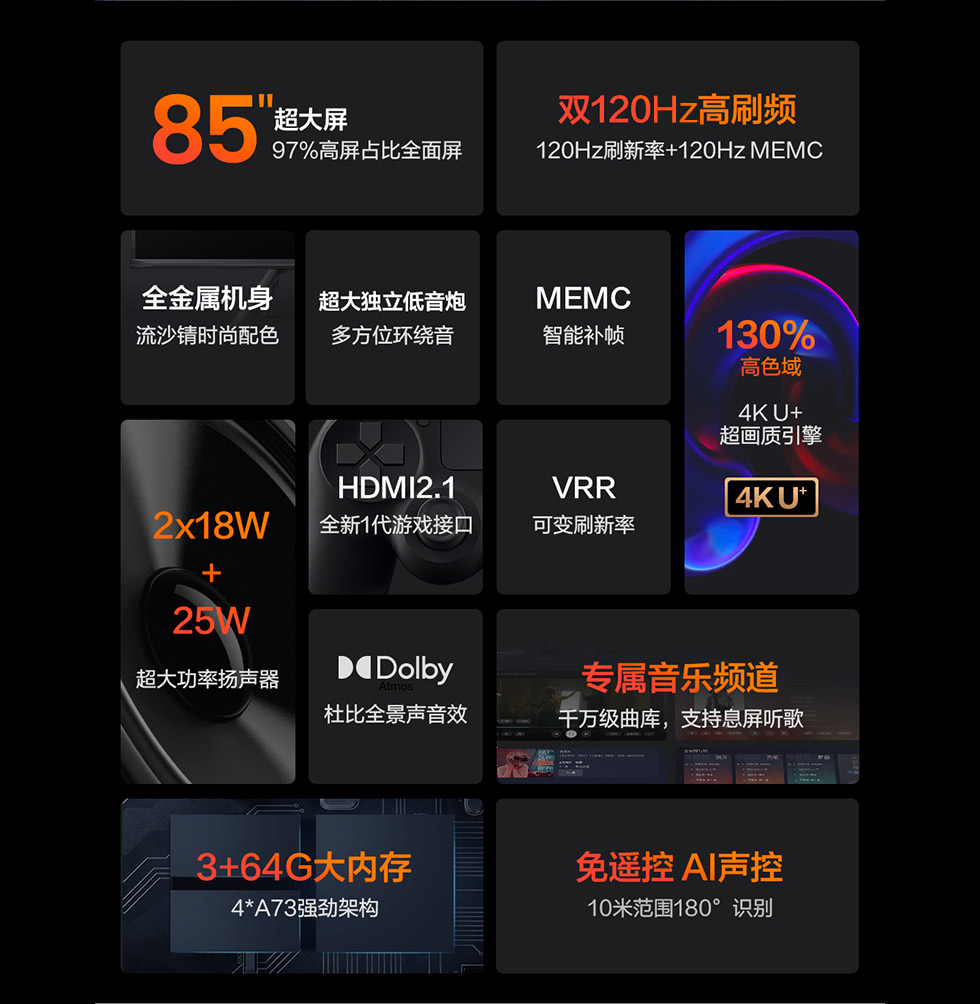 Hisense has announced its expansion plans for the Indian market including setting up a local manufacturing plant with a capacity of 2 million TVs within the next 2 years and expanding their product portfolio with upcoming launches this year. In addition to this, Hisense will also be launching an array of products including Laser TVs, QLED TVs, and home appliances. Talking about future investment plans in India, Mr...

We continue to explore the 2021 Hisense TV lineup for various markets around the world in order to bring some sense and structure as one and the same series has different specs and features for different markets. The subject matter of this article is the Hisense U8G series. In the USA, this series is also known as Hisense U88G. It comprises two models - Hisense 65U8G and Hisense 55U8G. Each has a 4K VA panel with...

This June marks the launch of the 2021 Hisense TV range in Australia. The TV range in Australia is the same as the one in Europe with the only difference being that Australia is the first to get the new 8K Mini LED model - the Hisense 75U90G. This TV has a peak brightness of 2000 nits and supports Dolby Vision, HLG, and HDR10+. It has more than 1000 local dimming zones and more than 10,000 mini LEDs. It is further...

Hisense has recently launched the U9G Mini LED 4K TV series in Europe. We decided to put in one place a few words about this series and the U9G Dual Cell ULED 4K TV series in the USA because the Hisense U9G series in Europe is very different from the Hisense U9G series in the USA. On the photo above, the TV on the left is the European 75" model. The TV on the right is the USA 75" model. The European series is also...

Hisense has launched the Hisense A7G QLED 4K TVs with VIDAA U5.0 OS for the UK and Australia. Availability for other markets remains unknown. The UK series includes four models. The one for Australia has one class size more -the 43" model. Moreover, the description on the Australian website mentions an 85" model but this as well can be a typo. Here are all models that have detailed specifications: Hisense 75A7G...

Hisense has unveiled its first 8K TV earlier this year in Australia dubbed Hisense 75U80G. For the USA market, the TV was announced earlier this month. The US model is named Hisense 75U800GR. The most essential difference between the two is that the Australian model is based on Android 10, while the USA model is based on Roku TV. Except for the TV tuners, all the rest seems to be pretty much the same. The Hisense...

The Hisense 75U9G a.k.a. Hisense 75U9DG is, currently, the only model from the Hisense U9G series for the USA. According to Hisense, "This TV is our moon landing. Our Sistine Chapel." The main advantage of this series and the Hisense 75U9G in particular is the Dual Cell Technology. Two panels stacked together creating 40 times more contrast than a regular LCD TV. Made possible by layering a luminance control panel...

At the Hisense Customer Conference and EURO 2020 Strategic Release Conference held in Shanghai, China, Tang Qian, Deputy General Manager of the Brand Management Department of Hisense Group, officially launched the strategic marketing theme of EURO 2020 for China: "Hi Champion". Hi, the abbreviation of Hisense, aims to pay tribute to consumers and partners; the Champion not only explains Hisense's leading advantages...

Hisense is yet to announce its 2021 TV series. Even though it is focused on laser TVs and dual-layer ULED LCD TVs, it looks like it will also launch OLED TVs in 2021. The first to get a Hisense OLED TV is Japan. Next month, the country will have the Hisense X8F series available. It will include a 48-inch model dubbed Hisense 48X8F - the first in that size for the brand. This Hisense X8F series includes 4K OLED TVs...