The LG 27QP88D was announced back in October 2021 together with the LG 32QP880 as the first models from LG's second-generation Ergo monitors.

Today, LG has released the full LG 27QP88D specifications readying the Ergo Dual for market launch in North America. Among all other things, the most noteworthy feature of the Ergo Dual is its second generation ErgoStand which in this case holds two separate monitors allowing them to be combined and used as the customer intends. Each monitor can be individually swiveled, pivoted, and tilted. The whole setup can be height adjusted up and down, retracted and extracted, swiveled, and tilted. It can be used by one or two persons simultaneously.

As for the display specifications, each of the monitors on the LG 27QP88D uses a 27-inch QHD IPS display by BOE with an Edge-LED backlight and native 8-bit color. The displays cover 99% of the sRGB color space and offer 350 nits of peak brightness. HDR10 is supported. 5ms GTG response time is also specified for each together with a 48-75Hz VRR with AMD FreeSync. The connectivity options include a DisplayPort 1.4 and a DisplayPort 1.4 out for daisy-chaining, an HDMI 2.0 input, a USB Type-C port with 65W power delivery, and DP Alt Mode, two USB 3.0 Type-A ports, headphone jack. The setup arrives with two DP cables, two HDMI cables, and two USB-C cables - one for each of the monitors. The price is not out yet. 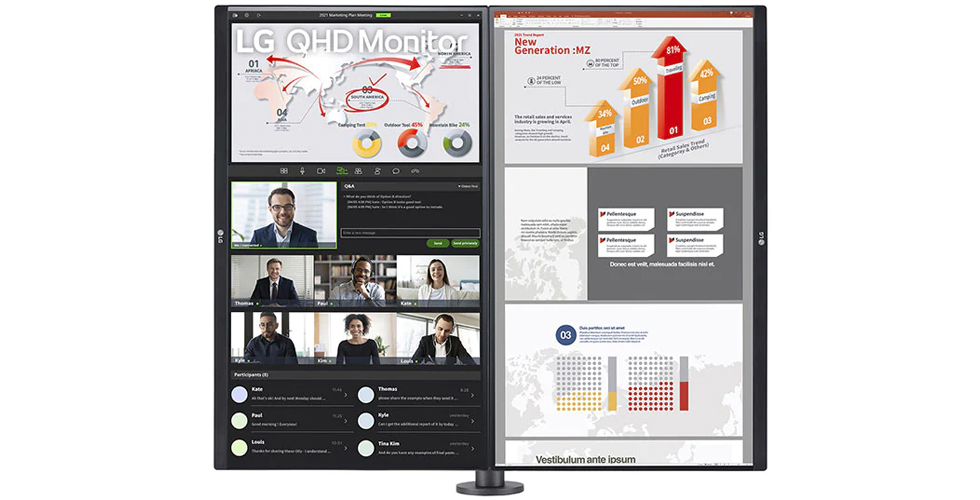 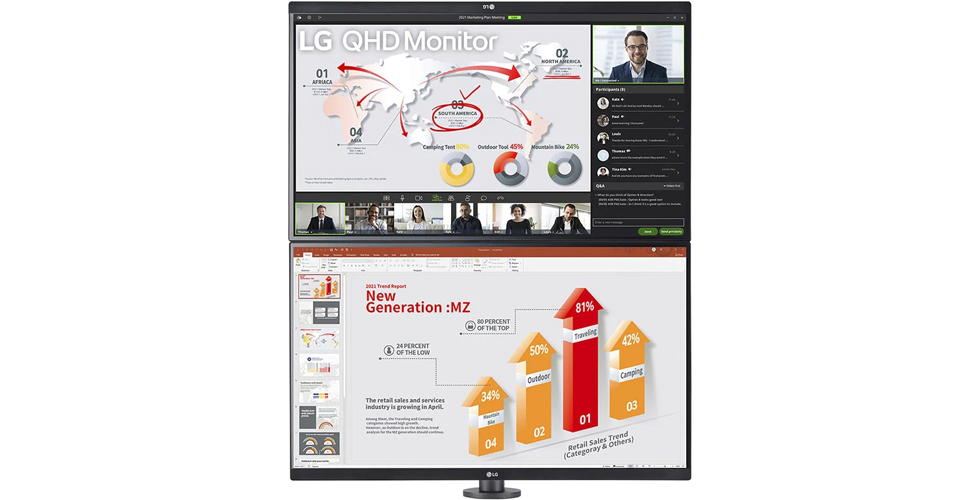 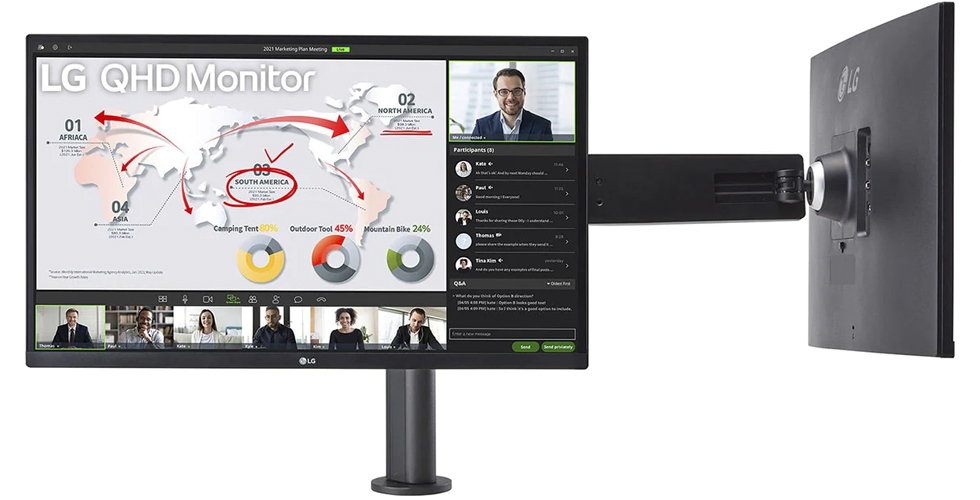 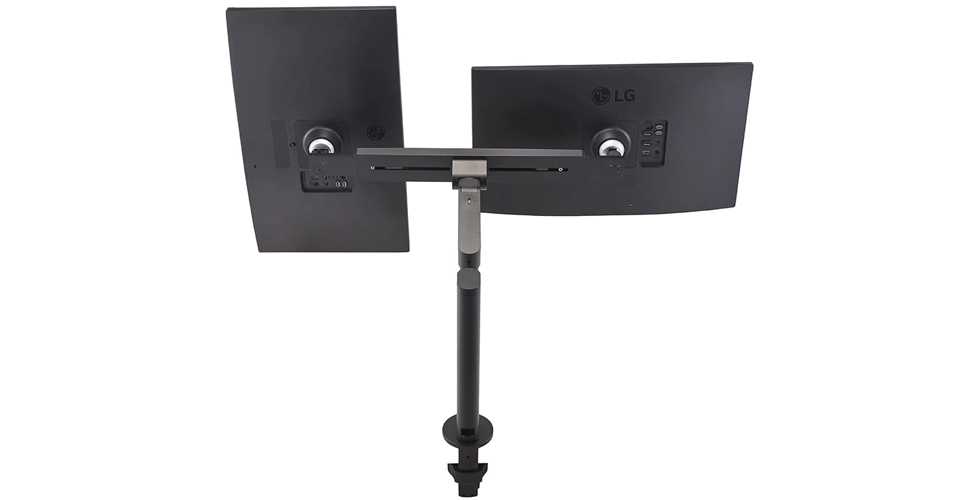 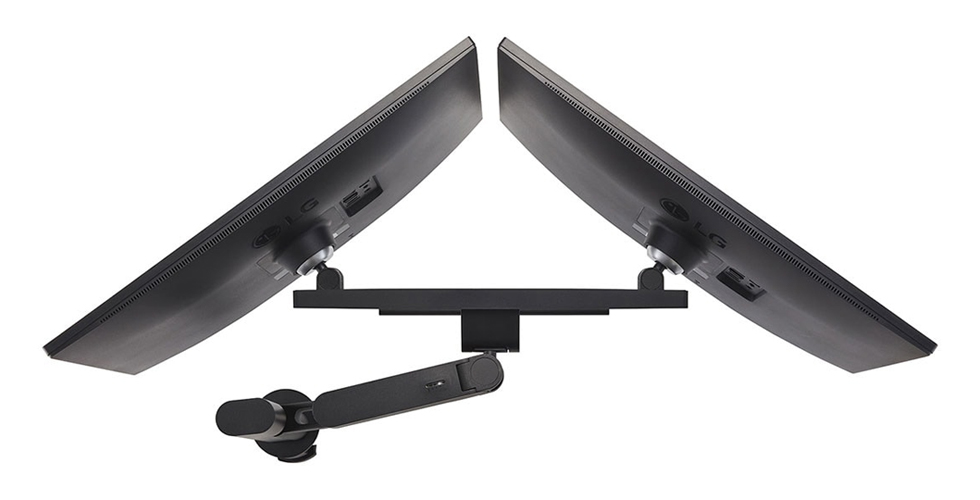 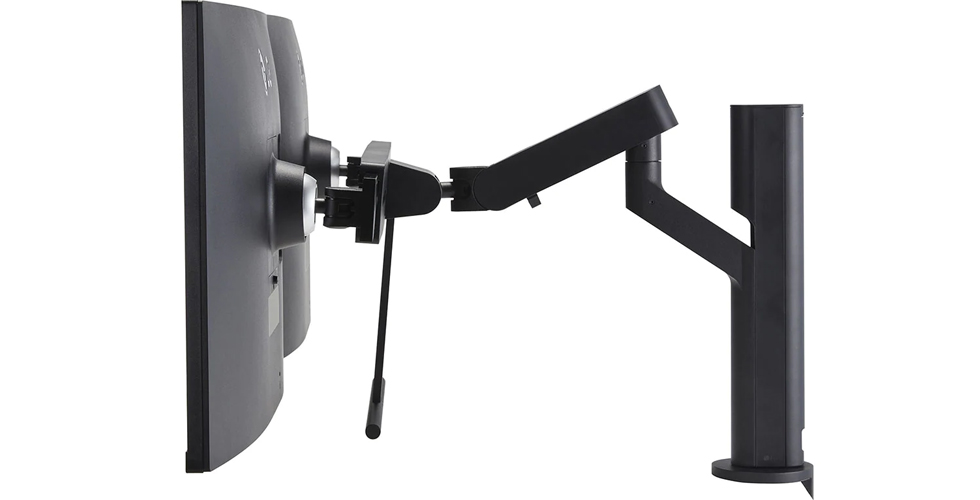 Report: Samsung will present new TVs with W-OLED panels from LGD in June at the earliest

The Elec has learned that Samsung will launch OLED TVs with panels from LG Display in June at the earliest. The initial plans were to launch such TVs in the spring. The delay was due to negotiating the unit price and the number of panels. Samsung has required a lower price than the initially pitched one which was already lower than that offered to LG Electronics. It becomes clear that Samsung and LG Display will...

On LG's CES 2022 microsite dedicated to gaming, there are three products in focus and the one that interests us most is the LG 32GQ950 UltraGear gaming monitor. Featuring a 4K Nano IPS with an ATW Polarizer technology, it supports high-fidelity color expression for reproducing vivid scenes. Obviously, its display reaches up to 1000 nits of peak brightness because the model is VESA DisplayHDR 1000 certified. It also...

Brelyon and LG Display today announced a strategic cooperation under which Brelyon will integrate LG Display's P-OLED technology into its ultra-immersive, virtual monitors. The companies will serve the rising large format gaming and productivity sectors with a solution that far supersedes anything the world of monitors has seen before. The new category which was introduced by BRELYON last year uses computational...

Two interesting LG UltraFine monitors with 32-inch 4K displays have won the CES 2022 Best of Innovation and Innovation Awards Honoree certifications. The first is the 32 UHD LG UltraFine Display Ergo AI known as LG 32UQ890. This is the first monitor capable of automatically detecting a user's posture and adjusting its display position accordingly. With its ergonomic stand, premium display, and LG's AI technology...

Demonstrating its continuing leadership in the LCD TV space, LG is also unveiling an expanded QNED TV lineup for 2022. Boasting LG's own Quantum Dot NanoCell technology, the fresh range offers stellar color reproduction with 100 percent color volume. Able to deliver rich, accurate colors in the brightest and darkest areas of a scene, the 2022 LG QNED Mini LED TV is capable of amazing contrast thanks to LG's...

LG today unveiled its most advanced and impressive TV lineup yet, headlined by the company's exceptional 2022 OLED TVs. With powerful imaging technologies and an improved webOS offering even more smart features and services, LG's latest models are expected to elevate the viewing and user experience like never before. 2022 LG OLED TVs The leader of the global premium TV market for nine years and counting and a CES...

LG Display, the world's leading innovator of display technologies, announced today that it will be showcasing its latest innovations at CES 2022. Under the theme of "Display Your Universe", LG Display will be introducing innovative solutions that not only cater to people's constantly-evolving needs and various lifestyles, but also propose new experiences set to redefine the way people do ordinary tasks in their...

At CES 2022, LG is presenting its vision for an enhanced lifestyle and a better future for all. Hosted by LG CEO William Cho, LG World Premiere tomorrow will introduce the company's diverse innovations for the new year and will detail its continuing efforts to create a more inclusive user experience and sustainable tomorrow. LG's theme for CES 2022, The Better Life You Deserve, emphasizes LG's ultimate goal to...

The LG 40WP95C is the third desktop monitor featuring this specific 39.7-inch IPS display with a 5K2K resolution and a 2500R curvature. The other two monitors are the Lenovo ThinkVision P40w-20 and the Dell U4021QW which were unveiled at the beginning of this year. The display specifications of all three models seem to be identical - a 39.7-inch diagonal size, IPS panel (LG specifies a Nano IPS one leading us to...

DSP Concepts, the creator of the Audio Weaver development framework that powers sound and voice functionality for many of the world's leading consumer and automotive brands, announced that LG Electronics has implemented the TalkTo audio front end for improved voice pick-up and speech recognition on its new LG Objet TV (65ART90). DSP Concepts used the Audio Weaver design platform to craft a custom solution for LG...

LG Display unveiled its newest OLED TV technology - OLED EX. The "EX" is an acronym of 'Evolution' and 'eXperience', which represents the company's goal of providing customers with new experiences through its ever-evolving OLED technology. The EX Technology applied to the OLED EX displays combines deuterium compounds and personalized algorithms to enhance the stability and efficiency of the organic light-emitting...

Designed to meet the needs of professional users world-over, LG's newest premium monitors for 2022 will make their debut at LG's CES 2022 virtual press conference on January 4. Both the LG 32UQ85R UltraFine Display and the LG 28MQ780 DualUp Monitor offer sleek and practical designs, enhanced connectivity, and superior user experience for both home and office workers, including creative professionals and programmers...

The LG 32BP95E and the LG 27BP95E are the two new UltraFine OLED Pro desktop monitors which were announced in March this year and will go on sale in January 2022. Each boasts 4K UHD resolution (3840 x 2160) screens with a 1000000:1 contrast ratio and 99% coverage of the DCI-P3 color space, making them suitable for even the most detailed digital projects. Both new displays offer independent pixel control for...