TCL has sold 32 million TV sets in 2019 globally. This accounts for a 12% YoY increase in sales volume. According to the TV types, 4K TVs volume sales increased by 31% YoY and Smart TVs by 19%. The two account for 51% of the total TCL sales volume of TVs. The increase in QLED TV volume sales is 66% YoY. More specifically, the number of TCL TVs sold in markets outside China are 65% of the total sales. They have increased by 26% YoY to 13.46 million units.

In North America, the growth of TCL TVs sales has increased by 14% YoY. In the first three quarters of 2019, TCL ranked as the second-best TV brand in the US market in terms of sales volume. In Europe, the sales volume increased by 35% in 2019 and the Q4 YoY increase was 54%. TCL's sales volumes have increased in India, Argentina, Australia and Russia with YoY growth rates of 151%, 121%, 79% and 46%, respectively.

TCL is quite optimistic for its 2020 sales. During CES 2020, it unveiled its Vidrian Mini-LED technology. This is the world's first TV backlight with the driving semi-conductor circuitry and tens of thousands of micro-meter class mini-LEDs directly infused in a crystal-clear glass substrate. This technology will be available for high-end TCL TVs in the 65", 75" and larger size classes. In addition, the newly announced 2020 TCL 65X915 and 75X915 won the 8K QLED TV Gold Award at CES 2020. 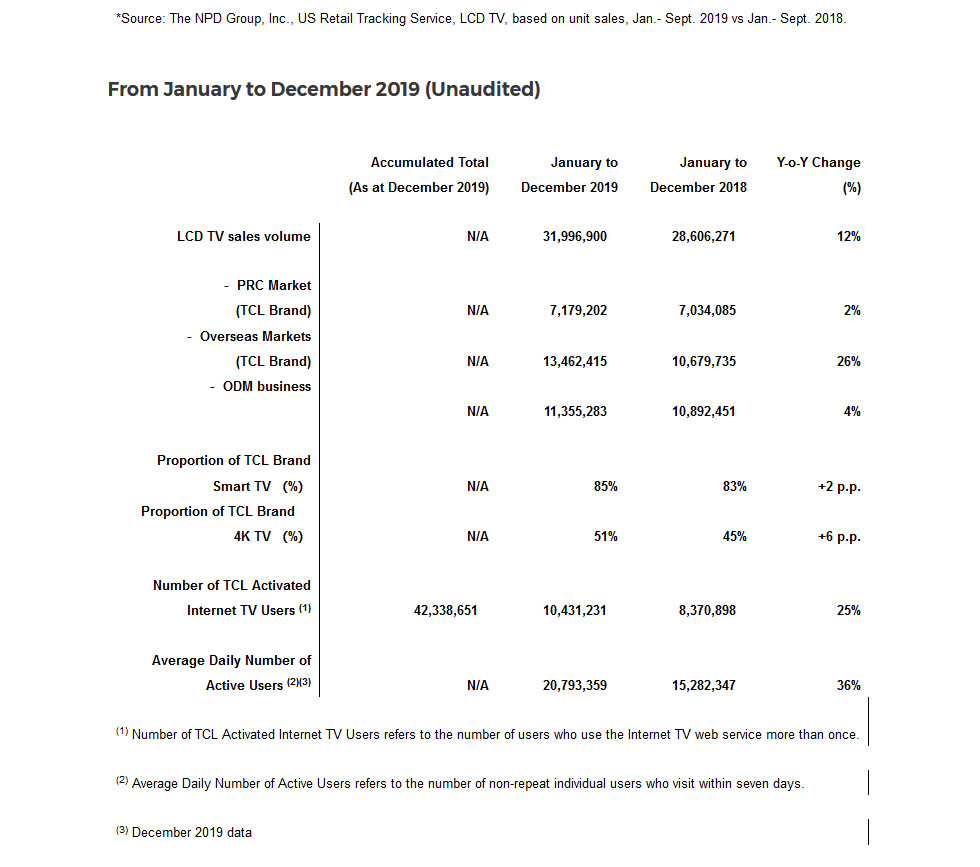 Korean media The Elec reports that TCL enters the market niche of vertical TVs joining Samsung and Xiaomi (partially). At a special media event in Guangdong, China, the company has presented the XESS vertical TV. The company CEO said that according to data from Penguin Think Tank, more than 80% of consumers would like to view content in a different way. The XESS TV has a 55-inch diagonal size with slim bezels...

TCL, America's fastest-growing TV brand, has announced pricing and US availability of its new TCL Roku TV models within the company's all-new 8-Series. Just like the 6-series, the 8-series TVs employ the Quantum Dot (QLED) colour technology and offer 100% coverage of the cinema DCI-P3 colour space. They also support Amazon, Netflix, VUDU, Xbox One and Apple TV as well as the Dolby Vision HDR technology. Through...