Sharp has launched the Aquos 7 series of 4K TVs in China. These include the 60-inch Sharp 60SU875A and the 70-inch Sharp 70SU875A, both using an ultra-narrow metal frame design (9.7 mm). The surface adopts a thin brushed high-gloss diamond cutting process. It has a metal and aluminum two-color oxidation body and frame. The frame uses a seamless arc bending process. The front frame uses metal brushing, two-color oxidation and high-gloss diamond cutting. The sleek and atmospheric posture highlights the unique design sense of high-end products. The screen ratio of the whole machine reaches more than 95%, which perfectly meets the family's needs for large frameless screen viewing, and achieves the aesthetics of a light luxury and minimalistic living room.

Sharp's 4K LCD panels arrive with is equipped with Sharp's AI technology, which uses an intelligent analysis algorithm of the image on the basis of the accurate division of the backlight area and the control of brightness and darkness. It automatically analyzes and optimizes the contrast of each frame so that the bright areas are brilliant and colorful, the dark areas are deep and rich, and the light and shadow details are vivid.

The TVs have a peak brightness of 1000 nits and support HDR10 and Dolby Vision. They employ the MEMC tech for smooth motion. Sharp also achieves a wide color gamut through KSF phosphor molecules, which is different from ordinary wide color gamut technology. It does not contain any heavy metals and will not harm the human body. 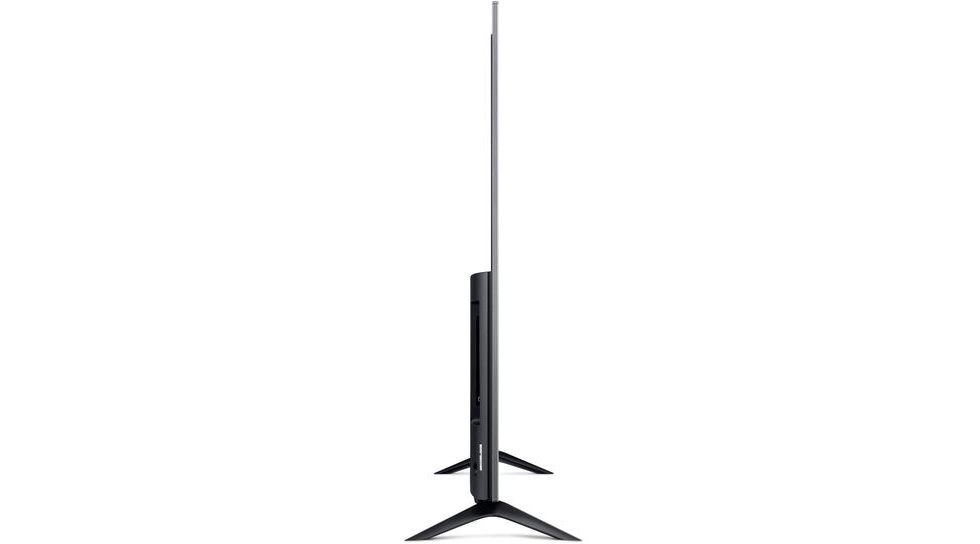 Sharp will present a number of display solutions at CES 2020, including 8K units and its 5G ecosystem

Sharp will participate at the CES 2020 which will be held in Las Vegas, from January 7 to January 10. The exhibition booth is located in the Central Hall (14006) and is designed under the "Realize" theme which will be focused mainly on Sharp's vision of future 8K products and its participation in the 5G ecosystem. Among the most interesting Sharp products will be the 120-inch 8K LCD display. The company will also...

Sharp has announced that it has developed a rollable 30-inch 4K OLED display in collaboration with the Japan Broadcasting Corporation (NHK). The unit on display is a prototype that uses a flexible 30-inch film substrate that's the world's largest colour filterless flexible 4K OLED display. There is no colour filter because it uses a vapour deposition technology which allows the formation of elements that emit light...

Next week, Sharp will present an 8K TV with a 120-inch diagonal size at the IFA 2019 in Berlin. The TV will be showcased from September 6th to September 11th. It will have an LCD panel, making it the largest LCD display in the world at present. It will also be a crucial part of Sharp's 8K+5G Ecosystem that takes advantage of the possibilities offered by the massive high-speed data transfer capacity of 5G mobile...

At the IFA 2018 in Berlin, Sharp showcases its second generation of 8K TVs. There are three models - 60-, 70-in an 80-inch one. They will be available from 2019 in Europe, while Asian users will see them in markets a bit sooner. The 80-inch Sharp 8T-C80AX1 flagship features the company's newly developed UV2A II LCD panel which provides a highly efficient light transmission. The exact specifications of the models...

Sharp releases the AQUOS 8K series of TVs and displays in Japan, China, Taiwan, and Europe

Sharp plans on releasing the AQUOS 8K series of TVs and displays in China in October, in Japan in December, in Taiwan in February 2018, and in Europe in March 2018. Moreover, the company aims at creating a complete 8K ecosystem that will include by 8K broadcast receivers, 8K cameras, and other 8K products developed by Sharp. The first model from the Aquos 8K TV series is the Sharp LC-70X500. The model has a 70-inch...

Sharp has announced the new generation of professional-grade LCD displays from its award-winning PN-R series. These are the PN-R426 with a 41.9-inch diagonal, PN-R496 with a 48.5-inch diagonal, and PN-R556 with a 54.6-inch diagonal, which have won "Best of Show" at InfoComm 2016 because they provide extreme flexibility for various installation environments and maximum compatibility with various digital signage...

Sharp has made the first commercially available 8K4K TV, which will go on sale on October 30th. The Sharp LV-85001 has an 85-inch, 12-bit IGZO LCD panel with a resolution of 7680 x 4320 pixels at 120Hz, which is four times higher than the 4K resolution. This type of panel is used in high-resolution displays of mobile devices, but, despite the high resolution, the big diagonal size means the pixel density is very low...