Samsung Electronics will unveil its new 2020 QLED 8K TVs at CES 2020, the world's largest electronics exhibition in Las Vegas, from July 7 to 10 (local time). The company has released to official photos of the Samsung Q950TS.

The 2020 QLED 8K TVs features an advanced AI technology that delivers a whole new level of 8K experience through product-wide innovations from picture quality to sound to smart features. It also sets a new standard for TV screens by applying the Infinity design, which eliminates the screen bezel. The Samsung Q950TS are equipped with an AI quantum processor that combines machine learning and deep learning in a 2020 QLED 8K. The deep learning method enhances the upscaling function, which converts the image quality to 8K level regardless of the image quality of the original content source, and improves the image quality by expressing the complex contours and textures more delicately than before. The new AI quantum processor runs on a neural network model and generates its own algorithm from the trained database, enabling optimal upscaling of any image.

The 2020 Samsung Q950TS TVs have a new "Adaptive Picture" feature that provides optimized brightness and contrast in any viewing environment. Consumers don't have to deliberately turn off the curtains or turn off the lights, even in strong sunlight, because the TV automatically recognizes the environment and adjusts the screen brightness automatically. Samsung also introduces an AI ScaleNet technology that reduces the loss of original data during video streaming. The technology will be applied to Amazon Prime Video apps in collaboration with Amazon. In addition, 2020 QLED 8K TV will be able to enjoy streaming video of YouTube's 8K AV1 codec.

One of the biggest features of the 2020 QLED 8K is its ability to deliver rich sound. OTS+ (Object Tracking Sound Plus) is a technology that recognizes moving objects in the video and moves the sound along the speakers mounted on the TV. This technology enables 5.1-channel surround sound on a TV alone, allowing you to immerse yourself in the scene when there is dynamic movement on the screen, such as a fast-moving scene. Samsung will also introduce a new "Q-Symphony" feature, which will find the best sound by using both the TV and the soundbar's speakers. This feature has received CES Best Innovation Award, delivering 9.1.4 channels of high-quality sound that is richer throughout the home. Samsung also adopts an AVA (Active Voice Amplifier) feature, which allows the TV to recognize ambient noise and adjust the volume of the video speaker's voice. With this feature, consumers don't have to worry about losing drama lines even when the surroundings are noisy.

The 2020 Samsung Q950TS 8K TVs feature an Infiniti design that eliminates the screen bezel, and can utilize up to 99% of the screen, providing outstanding immersion and elegant design. In addition, the 15 mm ultra-slim design and a completely flat back side set the bar for luxury screens with Infinity design. A completely redesigned Universal Guide offers more usability. The Multi View feature will allow consumers to multitask while watching TV "side-by-side" or "picture-in-picture".

The 2020 Samsung Q950TS also offers enhanced connectivity options with other devices. "Tap View" is a new feature that allows you to mirror your smartphone to your TV by a single touch. In addition, the "Digital Butler" function was introduced to allow the TV to recognize and control not only devices connected via Wi-Fi or Bluetooth but also older devices not connected to the Internet. The 2020 Samsung QLED 8K has also expanded its voice recognition service. In addition to Samsung Bixby, which is optimized for TV function control and content experience, Amazon Alexa and Google Assistant are installed to improve consumer convenience. 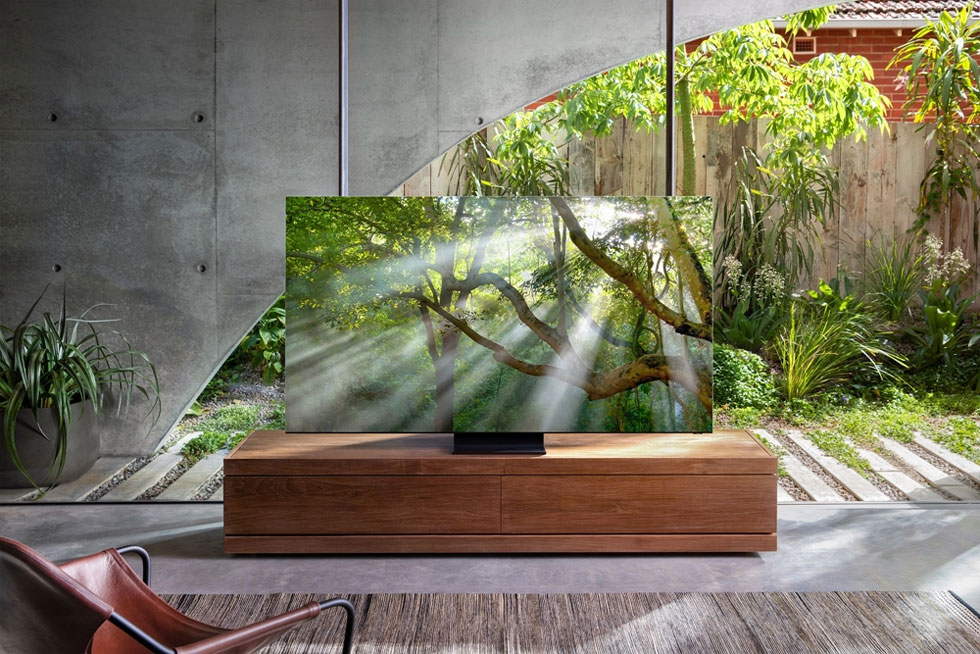